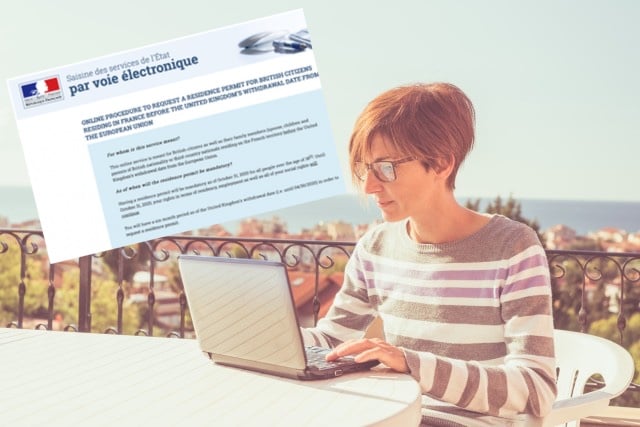 You could apply online for residency in France. Photo: fbxx/Depositphotos

UPDATE: This was the system in place for a no-deal Brexit, a different system is now in place. Click here for the latest information.

While we're still not sure exactly what is happening with Brexit – deal, no deal, extension – the French government has decided to launch it new online platform for British people who are already in the country to apply for residency.

Although applications on the site are now open, they will not start to be processed until Britain has actually left, by which time we will know whether we're going out with a deal or without.

The applications themselves will still be processed by each person's local préfecture, but the website offers a more convenient way for everyone to get their application into the system.

READ ALSO France's new carte de séjour website – what does it work and what will I need? A screengrab from the site, which is available in both English and French

There have also been efforts made to streamline and simplify the process so most people should have to supply considerably fewer documents than the suitcase-loads demanded by some préfectures. Although a word of warning – once you have made your application your local préfecture can still ask for extra supporting documentation, so don't throw anything away.

With warm promises of a simple and streamlined process ringing in our ears, we asked readers of The Local what using the site was really like.

And it seems that for many people, it really was simple.

John Crowhurst described the site as “Simple to use. Initial confirmation of receipt received instantaneously. E-mail confirmation received within an hour.”

However he added a word of warning: “You should ensure that you have all attachments available before you commence completion as the software does not save partially completed forms and return to them without starting again.”

Clair Pickworth agreed saying the site was “very simple and straight-forward for my case.”

Kerry Moriarty Farnsworth said: “The site itself was relatively easy to use. However there were some functionality issues: For each of the four categories that you had multiple options for forms of evidence, they actually only allow uploading of one document. I got around it my combining several bits of evidence into 1 PDF document, but not everyone will have the knowledge or software to do that.

“Also the free text section at the end which allows you to add any supplementary information in support of your application has no upload facility, which would help. However the real proof of the pudding will be as/when anyone at my prefecture looks at it, and decides whether or not I have to provide additional information to jump through a few more hoops.”

However other people did have more problems for more complex cases.

Those who already have a 10-year carte de séjour permanent simply need to supply that and their passport to swap it for the new documentation.

Everyone else needs to fill in the full form. Once you have entered your name and date of birth, the site then asks how long you have been resident in France for and whether you are an employee, self-employed, a pensioner, student, unemployed or otherwise economically inactive.

What you reply then determines what you're asked to supply in terms of documentation.

Everyone has to supply something that proves the date of their arrival in France, this can be a work contract, a rental agreement, a tax return for your first year in France or a utility contract.

For employees it's pretty simple – you need your work contract and most recent payslip.

For people who either run their own businesses or operate as a freelance you will need to provide proof of your earning, in many cases tax returns will be enough.

Pensioners need to supply details of their pension arrangements.

One detail that seems to be catching some people out is the request for maladie d'assurance, or health insurance as it is translated on the English section of the website.

This does not mean that you need to take out additional private health insurance, it is simply asking you if you are already registered with the French health system trough a carte vitale or the S1 scheme. If you are already in the French system, you simply need to show your Attestation de droits à l'assurance maladie, which is the document confirming that you are registered.

If you have an online account with www.ameli.fr you can download it online, if not a visit to your local CPAM office will provide the necessary document.

In French additional top-up insurance is known as a mutuelle, which some people may also supply proof of. For people who fit neatly into one of the categories there seem to be few problems – the one glitch that people have mentioned is that when inputting passport details the 'expiry date' cannot be later than April 2029, while for some people with recently renewed passports their expiry dates will be later than that.

However, the site says that the date must be 'equal to or earlier than' April 2029, and it seems to accept April 2029 as a cut-off date.

For some others with complicated situations, the category system is not proving ideal and some say they have struggled to explain their full situation and fit into a category.

Alexander Nikitich said: “The website ignores a whole category of applicants: dependent members of the family other than direct descendants or ascendants.

“This could be just an oversight as I imagine this is numerically the smallest category of potential applicants, but nonetheless an important one. Would be great if they would fix it.”

However it should be noted that there is an 'any other information' box at the end where you can provide more details, and each application will still be reviewed in person by an employee at your local préfecture.

READ ALSO The French government's decree for a no-deal Brexit, what you need to know

A spokesman for the DGEF, the part of the French Interior Ministry that deals with residency for foreigners, has also confirmed that for people with no internet access it will still be possible to visit their local préfecture to complete the application.

“For those with a carte de séjour permanent it looks to be, as promised, very straightforward.

“Good also to see a contact email for questions BUT how will this be covered as it could be inundated?

“Also, it really needs to specify the amount of RSA so that people don't have to look it up!”

The RSA is the French in-work benefit and the level at which RSA is paid is used in residency applications to determine whether people have 'sufficient' income.

There are other figures for families with children – see the government website here for details.

Anyone who is not making this level doesn't need to panic – the no-deal decree states that other factors such as owning your own home could be taken into account, but is at the discretion of the individual préfecture.

If you have experience of using the site and want to share feedback or highlight a problem, you can do so here.