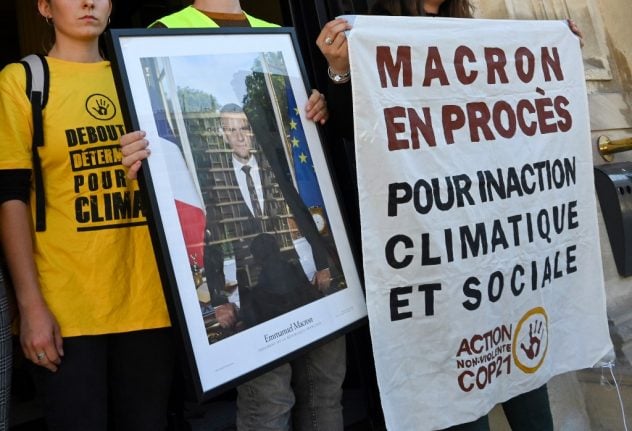 The trial is the third in France over the phenomenon of stolen Macron portraits.

But a Paris court on Wednesday returned a different verdict, ruling that the eight accused, who are aged between 25 and 35, were guilty of “group theft”, a charge that carries a maximum five-year jail term.

The eight had all admitted to taking down the pictures of Macron hanging in three local government offices around Paris in February, as part of the “Take Down Macron” campaign of civil disobedience.

They claimed a “moral duty” to act in the face of what they called the inaction of Macron's government on climate change. Some of the portraits were later used on demonstrations. Photo: AFP

The first trial over the portrait thefts took place at the end of May in the eastern town of Bourg-en-Bresse, where an environmental campaigner was fined €250 and five others received suspended fines.

All public schools and government offices in France display the president's portrait, with Macron's showing him perched on the edge of his desk with two mobile phones and the memoirs of French resistance hero and post-war president Charles de Gaulle behind him.

The group behind the portrait thefts, Non-Violent Action COP21 (ANV-COP21), claims that some 130 pictures have been stolen across France.

Some popped up at a protest in southwest France in August, where Macron was hosting a G7 summit of world leaders.

It is not the first time the centrist president's picture has been targeted by critics.

In October 2017, mayors in the central Creuse region turned his picture around so that Macron faced the wall, to protest cuts to local government budgets and job losses.