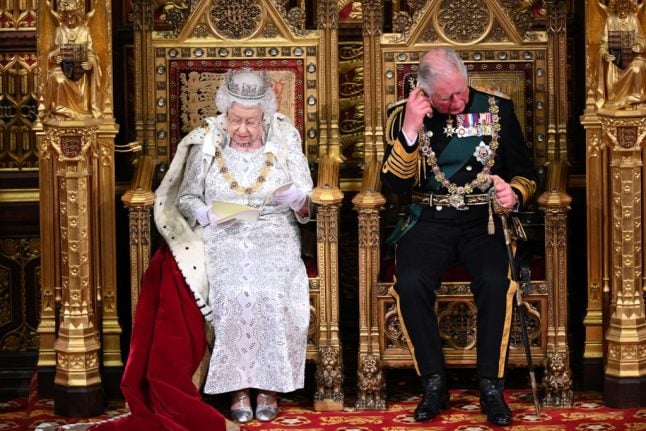 The State opening of Parliament in London is a frankly bizarre hotchpotch of political manifesto and century-old tradition, made even more odd this year by the knife-edge state of British politics.

French journalist Sonia Stolper, the UK and Ireland correspondent of French newspaper Libération, was given the unenviable task to attempting to explain the whole things to her audience back in France. The Queen travels by coach to parliament and back. Photo: AFP

In an epic Twitter thread Sonia recounted the process, complete with the Queen in a horse-drawn carriage, Black Rod banging on the door with a stick and the procession of MPs to the House of Lords and adds her own thoughts on the extreme oddity of the process.

In addition to all the pageantry, the State opening of parliament does have an actual political purpose – it's when the Queen spells out the agenda of the ruling political party for the next parliamentary session. Although she delivers the speech, it is written for her by the Prime Minister of the day.

But this year even that was rendered odd by the knife-edge that British politics is teetering on – Prime Minister Boris Johnson does not have a parliamentary majority for his Conservative party and an election is highly likely in the weeks or months ahead, so most of the policies that were announced in London yesterday will be unlikely to be enacted.

Here is Sonia's take on a particularly British moment . . .

1. The Queen's Speech represents one of the great moments of Parliament, when all the theatricality, or folklore, of the parliamentary monarchy, customs and pomp are deployed.
2. The speech, delivered by Queen Elizabeth II, was not written by the Sovereign but by her government, which is presenting here its legislative programme for the year.
3. The House of Lords is packed with Lords, all dressed in their red capes lined with ermine. All shoes have been waxed, belt buckles polished, everything shines with a thousand lights The Lords all put on their best capes for the occasion. Photo: AFP
4. A first carriage has already arrived with the cape, the crown etc…. And now the queen herself has just left Buckingham Palace in her magnificent carriage, much more beautiful than Cinderella's.
5. In accordance with tradition, she is dressed in a white dress and the six horses who pull her carriage are also white. The drivers are in red livery with gold buttons, it's all very classy.
6. Next to the sovereign sits Camilla, wife of the heir to the throne, Prince Charles, who sits in front of her in a grand uniform
7. The procession quietly climbs up Pall Mall, the main avenue that leads from Buckingham Palace to Trafalgar Square, under a fitting light rain.
8. What is quite extraordinary is that the Queen will be delivering a legislative program for a government that may well fall in the next few days. No one knows what will happen after the Brussels European Council on Thursday and Friday
9. And early elections may well occur before the end of the year, which would make the programme presented this morning obsolete.

10. The queen is in the gold thing in the middle
Everything is paused while the queen puts on all the symbols of her office. Meanwhile, we can see the variety of costumes and especially the hats, it's quite incredible.
11. There are kepi, guards at the doors wearing something that looks like a riding hat, others are in black velvet soft hats with a small intertwined blue-white-red ribbon, there are some wigs too, of course
12. Ah ah, the trumpets are ringing.
13. And enter the crown on a red velvet cushion, symbol of royalty, and the Queen follows, accompanied by the Prince of Wales. Elizabeth II no longer wears the crown, because this item inlaid with huge diamonds really weighs very, very heavy on a 93-year-old head
14. The Queen is seated in her throne in the House of Lords; She gave the signal to the “Black Rod” to summon the members of the House of Commons. Before entering, traditionally, the door is slammed in his face, to say: we are independent of the Crown. 'Black Rod' is currently a woman, bu the outfit remains the same whoever has the job. Photo: AFP
15. But after three strong blows on the door, members give in and open the door. They all seem to think it's very funny and now there's a procession of 650 MPs who will come in and stand in the House of Lords. It's the only time they're allowed to enter it.
16. At the head of the procession, behind the Speaker, Prime Minister Boris Johnson and opposition leader Jeremy Corbyn, who does not look at him. I don't think they like each other very much.
17. The queen takes a furious look at her parliament, you can feel her annoyance at the circus of the last few weeks. What if she deviated from the speech written for her, threw it to the ground and said, “We are tired of this nonsense”?
18. That's not going to happen. She has just announced an immigration law “ending freedom of movement” after leaving the EU… Boris Johnson has a little smile on his face
19. Frankly, the spectacle of the Queen, her snowy hair (that hairdresser really!), the shiny tiara of a thousand lights, the white brocaded silk dress, the necklace of huge diamonds, the cape lined with ermine… It's like a beacon of light in a night of fog
20. Boris Johnson is… different. He displays a little grin (I'm there, I'm there, I'm there, I'm the PM, yippee), swings back and forth and keeps looking at the mines around him
21. “My government will take steps to preserve democracy,” says the queen. Why? Why? Is it in danger in the United Kingdom?
22. That's it, she's finished and frankly, she doesn't seem very happy. Not a shred of a smile on her face, and her eyebrows are deeply furrowed.

23. This is the endless cape. At one end the queen, at the other, pages. Come in, several metres of fabric….
24. MPs return to the Chamber and start debating the programme. The queen returns to Buckingham Palace for lunch.
25. The folklore is over, until next time….
26. All the same, starting the speech by categorically promising Brexit on October 31st, when nothing is less certain, is a little inflated.
You can follow Sonia on Twitter @SoniaStolper for her expert analysis of Brexit and British and Irish politics.