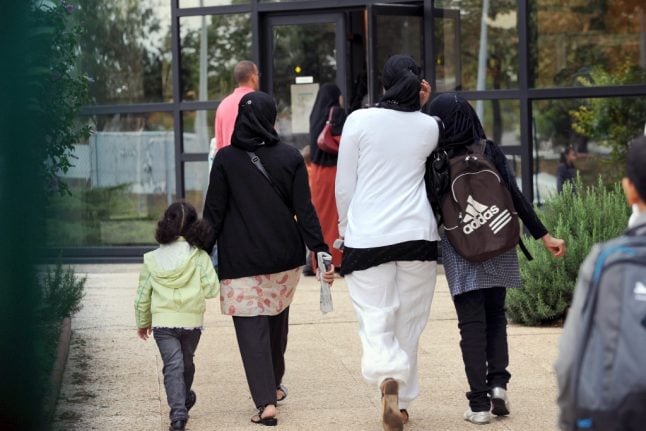 The issue has divided politicians and citizens in a country that often struggles with finding a balance between individual religious freedom and constitutionally-guaranteed secularism in the public sector, including schools.

Julien Odoul, a member of Marine Le Pen's National Rally (RN) party, caused widespread outrage when he posted a video on Twitter of him confronting a woman who accompanied pupils last Friday to the regional parliament in Bourgogne-Franche-Comte in eastern France.

Citing “secular principles” in the wake of the killings in Paris this month of four police staff by a radicalised convert to Islam, he insisted the woman, whose son was among the group, remove her headscarf.

Members of the RN then walked out of the chamber before issuing a press statement denouncing “an Islamist provocation”.

But many, including regional parliament speaker Marie-Guite Dufay, criticised Odoul's actions, saying neither the law of the country nor the rules of the chamber prohibited a member of the public wearing a headscarf.

Dufay denounced a “surge of hatred” and what she described as “undignified behaviour” on the part of a lawmaker.

The controversy has exposed divisions within the centrist ruling party of President Emmanuel Macron which is keenly aware Marine Le Pen's faction is its chief political foe. Even the country's Education Minister Jean-Michel Blanquer seemed unable to pick a side, stressing Sunday that “the law does not prohibit women wearing headscarves to accompany children”, while saying “the headscarf itself is not desirable in our society” because of “what it says about the status of women, what it says about our values.”

Government spokeswoman Sibeth Ndiaye also weighed in, saying it was important to allow space for exchanges between women who wear headscarves and those who do not, as this promoted “inclusivity”.

But Economy Minister Bruno Le Maire came to the defence of “a culture in which religion remains in the intimate, private sphere and does not have a place in (the) public sphere.”

And Budget Minister Gerald Darmanin added: “I would prefer that women in the Republic, in France, do not wear a headscarf.”

Prime Minister Edouard Philippe told parliament he was opposed to any kind of new law specifically targeting what should be worn on school trips.

He reminded MPS on Tuesday that laws set out in France's declaration of the rights of man in 1789 and the 1905 law that separates church and states protects citizens' freedoms of belief and expression of religious belief if it does not provoke public disorder.

“You can wear the veil when accompanying a school trip, but you don't have the right to  proselytise (try to convert others),” Philippe said.

The controversy is the latest in France over face and body-covering garments which many perceive as inappropriate in a secular country while others argue the garments allow Muslim women to be active participants in French society.

In 2004, the government prohibited the wearing of conspicuous religions symbols in public schools and banned the hijab — a garment that covers a woman's hair but leaves her face exposed — from classrooms and government offices.