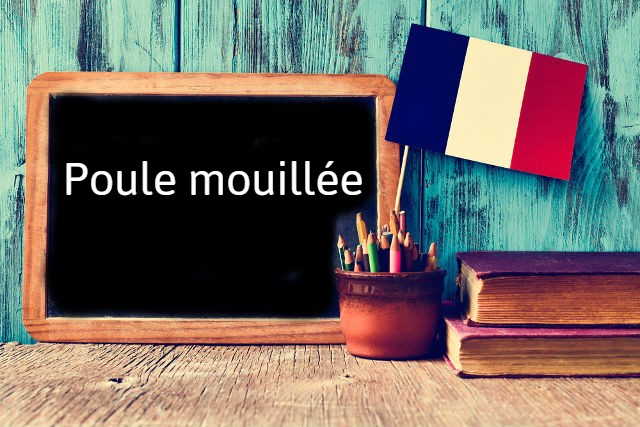 Why do I need to know poule mouillée?

If you have children in French school they may well be flinging this around the playground, but its a good one for adults if they want a quite specific insult.

It's literal meaning is 'wet hen' but it is really a slang term for coward, wimp, cissy or lily-livered poltroon (although we will admit that last one hasn't been heard around our way for a bit).

It's perhaps slightly childish, but it's widely used and will come in handy if you want to accuse someone of being cowardly.

So if your French friend is looking a bit shifty as the time approaches to go abseiling, you could tell him – Arrête d'être une poule mouillée et fais-le! Stop being such a wimp and do it!

Or when you're heading to the outdoor pool in February you could issue the challenge – Le dernier est une poule mouillée! – Last one in is a chicken!

Does it have any other uses?

In French une poule is a hen or chicken, while poulet refers to the meat of a chicken, so is more usually seen on menus.

As well as being used to signifying cowardice, you might also hear une poule used to refer to a woman. Probably not one to roll out at the feminist society meeting, it is roughly equivalent to calling a woman a 'chick' in English.

It can also be used as a term of endearment for children or close family members, as in ça va, ma poule? You OK, honey?

Another use for this term that we would strongly recommend that you don't use – but you might want to learn to recognise – is as a slang term for the police. In the same way that certain sections of British society refer to the police as 'pigs' French officers are sometimes referred to as les poulets.

The origin of the term is not particularly derogatory – is is believed to come from a time when the Paris police were headquartered on the site of a former poultry market. However these days it is definitely a term of abuse, and not one we would recommend using in front of a French police officer unless you are feeling particularly foolhardy.