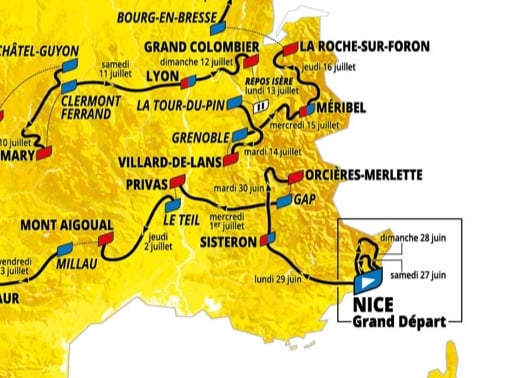 Almost all of the 2020 Tour de France will take place in the south of country.

The route was revealed by organisers on Tuesday and promises to be a tough challenge for riders but will once again reveal some beautiful corners of France, in particular its mountains.

The route will take in the Alps and Pyrenees as normal, but also the Vosges and Jura mountains as well as the Central Massif and its iconic mountain Puy Mary.

Riders will face a 29-mountain slog on an epic 2020 Tour de France, organisers said on Tuesday

“There are 29 mountains, it will be physically challenging throughout,” said Tour chief Christian Prudhomme, unveiling a route that also includes five summit finishes, one of them a time trial.

The punishing route rarely strays from the mountains even though there are nine flat stages.

“Even the so called flat stages will be very tough for the pure sprinters. There are traps everywhere along the route,” added Prudhomme.

Here's a glance at the route below.

There will be 12 new “villes-étapes” or sites that will welcome the race including the beautiful island of Île de Ré.

For the first time in the history of the Tour de France cyclists will race from one French island to another: Île d'Oleron to Île de Ré, both in the Charente Maritime département, on Tuesday July 7th. The 3,470km (2,156-mile) Tour will begin in the southern city of Nice on Saturday June 27th. The only stage in the north of the country will be the final stage on July 19th between the town of Mantes-La-Jolie and the Champs-Elysées in Paris.

The mountainous route is seen as favouring renowned climbers including Colombian champion Egan Bernal, his Ineos teammate Chris Froome as well as French duo of Thibaut Pinot and Romain Bardet.