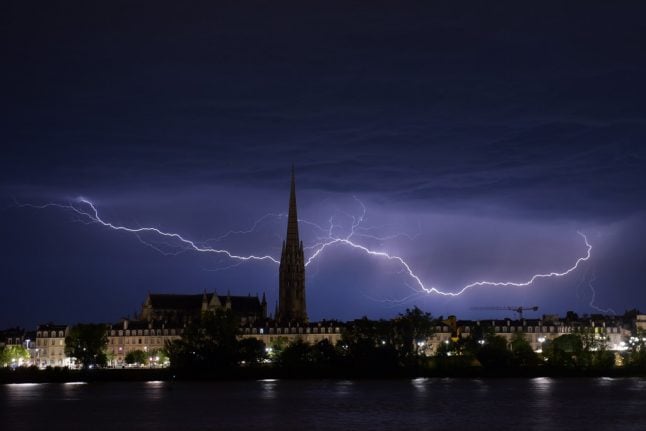 A total of 46 départements are on orange alert – the second highest alert – for violent storms which hit southern France this afternoon and are moving north.

Winds of 113 km/h have been recorded in Mayenne this afternoon, with 93 km/h gusts in Landes and Maine et Loire, while Nantes received 16mm of rain in just one hour. The weather forecaster stated: “In the afternoon on Monday, an active storm will enter Aquitaine and spread north east to gradually affect the Charentes, Poitou, western Limousin, central and southern Pays-de-la-Loire, and finally to Ile de France and the Hauts de France in the evening.

At the same time in the southern part the storms will spread to the shores of the Mediterranean in the middle of the night.
“High rainfall intensities are expected over a short period of time, between 20 and 30 mm, hail and strong gusts of wind, up to 110 km/h locally.
“This will continue in the evening and the following night towards the départments further east.”
The départements covered by the warning are: “Charente, Charente-Maritime, Cher, Dordogne, Eure-et-Loir, Gironde, Indre, Indre-et-Loire, Landes, Loir-et-Cher, Loiret, Maine-et-Loire, Orne, Sarthe, Deux-Sèvres, Vienne, Haute-Vienne, Aisne, Aveyron, Bouches-du-Rhône, Corrèze, Eure, Gard, Hérault, Lot, Lot-et-Garonne, Nord, Oise, Pas-de-Calais, Paris et petite couronne, Seine-Maritime, Seine-et-Marne, Yvelines, Somme (80), Tarn (81), Tarn-et-Garonne (82), Vaucluse, Essonne, Val-d'Oise, Alpes-de-Haute-Provence, Ardèche, Drôme and Var.