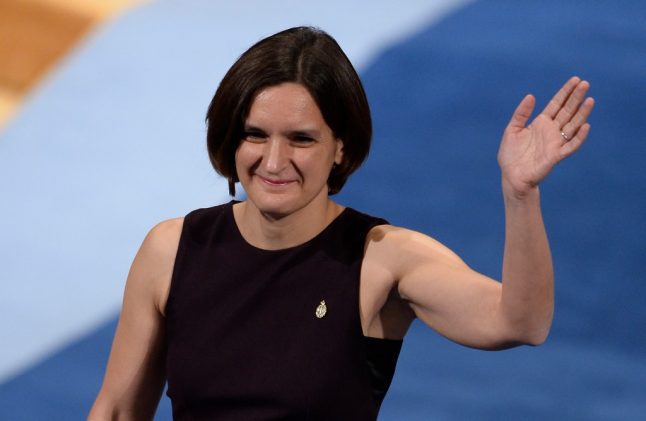 Esther Duflo is the youngest ever winner of the Nobel Economics Prize. Photo: AFP

Esther Duflo a high-profile academic feted in the United States and her home country France for her hands-on approach to studying how people can escape the poverty trap, won the prize jointly with her husband and former doctorate supervisor and a third academic colleague from the US

The 46-year-old professor, the youngest ever winner of the economics prize and only the second woman to gain the accolade, had been widely tipped since she picked up the prestigious John Bates Clark medal in 2010 which is often a first step to the Nobel award. Esther Duflo, her husband Abhijit Banerjee and Michael Kremer were the joint winners of the Nobel Economics Prize. Photo: AFP

But her age, gender and speciality – development economics – make her stand out among past recipients of the prize, who have traditionally been older, male and often American.

She won the award with Indian-born Abhijit Banerjee of the US and Michael Kremer of the US, all hailed by the jury “for their experimental approach to alleviating global poverty”.

Duflo is married to Banerjee, who was her doctorate supervisor, and both are professors at the Massachusetts Institute of Technology (MIT).

The economist made her name conducting research on poor communities in India and Africa, seeking to weigh the impact of policies such as incentivising teachers to show up for work or measures to empower women.

Her tests, which have been likened to clinical trials for drugs, seek to identify and demonstrate which investments are worth making and have the biggest impact on the lives of the most deprived.

“Our vision of poverty is dominated by caricatures and cliches,” she told AFP in an interview in September 2017 while discussing the aim of her fieldwork and research as a professor at MIT in Boston.

“We need to understand the obstacles faced by the poorest and try to think about how we can help them move on,” she said.

Duflo is just as likely to be found out in the dusty and impoverished villages of northern India, where she has worked alongside local academics, as she is in the rarefied halls of US academia.

“I love it,” she said of her fieldwork in an interview with The Financial Times in 2012. “I love everything about it. It is the only way, when you work on development, to get an intuitive sense of how people really live their lives.”

As a result, she has brought fresh perspective to the field of development economics, treading a new path between proponents of huge transfers of aid to poor nations, and those who reject such help as a form of rich-world paternalism.

Despite witnessing at first-hand acute malnutrition and misery caused by deprivation, the media-shy academic remains optimistic, stressing that poverty is in retreat globally.

“The story of the fight against poverty is full of successes. Extreme poverty has fallen sharply, infant mortality has been divided in half, schooling for primary-age children has become almost universal,” she told AFP in 2017.

Her work has been supported by billionaire philanthropist Bill Gates, and she was once an advisor to US president Barack Obama

The lover of classical music was raised in Paris and is the daughter of a mathematician father and a paediatrician mother, whom she credits with giving her an urge to help people less fortunate than herself.

Duflo attended the prestigious Henri IV school in the French capital and went on to win a place at the equally elite Ecole Normale Superieure university, a training ground for French academics.

But she left her home country to study at MIT, obtaining a doctorate in 1999 and joining the faculty. She secured tenure when she was just 29, marking her out instantly as a rising star.