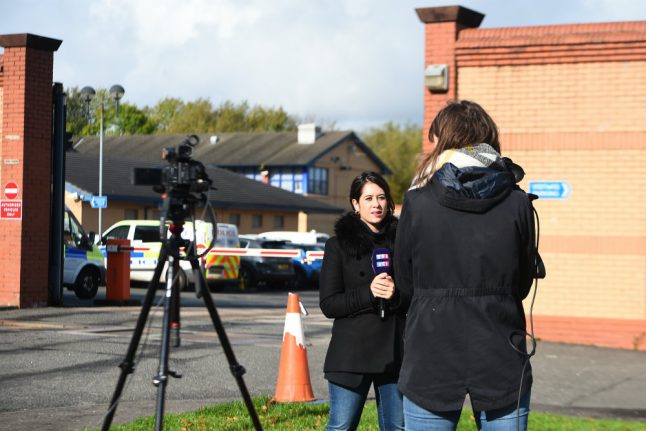 Media outside Govan Police Station in Glasgow on Saturday, as they wait for news on the identification of the arrested man. Photo: AFP

French judicial sources had initially believed that they had finally caught up with Xavier Dupont de Ligonnes, who was subject to an international arrest warrant for the 2011 killings which transfixed France.

But Scotland's police said they had informed their French counterparts that forensic tests proved the man detained at Glasgow airport on Friday was not Dupont de Ligonnes.

“Inquiries were undertaken to confirm the man's identity. Following the results of these tests it has been confirmed that the man arrested is not the man suspected of crimes in France,” the police,” said in a statement.

“The man has since been released. The man and his family have no wish to speak to the media at this time and ask that their privacy be respected on this matter.”

Sources close to the probe said the conclusion was reached after DNA tests.

The detained man was stopped in Glasgow after arriving on a flight from Paris following an anonymous tip-off, according to French sources close to the investigation.

Sources had said earlier that a fingerprint match had been made.

A police search was carried out on Friday at the arrested man's house in Limay in the western suburbs of Paris.

Neighbours told AFP the house belonged to a man with French and British nationality.

It remained unclear what caused the confusion. One neighbour said the arrested man does not “look anything like” Dupont de Ligonnes.

Dupont de Ligonnes, 58, is suspected of shooting his family dead and burying them under the terrace of their townhouse in Nantes, western France.

Their bodies were found three weeks after the killings during which time Dupont de Ligonnes reportedly told his teenage children's school he had been transferred to a job in Australia.

He is said to have told friends he was a US secret agent who was being taken into a witness protection programme.

French prosecutors have said he killed all five of his victims in a “methodical execution”, shooting them each twice in the head at close range with a weapon fitted with a silencer.

For years, France has been gripped by the question of how Dupont de Ligonnes disappeared without trace, with some suggesting he may have killed himself.

Hundreds of reported sightings only added to the mystery.

In 2015, a letter and photo of two of his sons, signed with his name and the message “I am still alive”, was delivered to an AFP journalist but experts could not verify its authenticity.

In January last year, police moved in on a monastery in the Var region of southern France after witnesses reported seeing a man resembling him but the suspect was not caught.

Le Parisien newspaper, which on Friday reported Dupont de Ligonnes' arrest in Glasgow, on Saturday apologised to the family of the victims and the wrongly arrested man.

The paper said in a statement it wanted to express its “sincere regret for having made public information which turned out to be wrong”.

Several other media outlets, including AFP, offered reasons for doing the same.