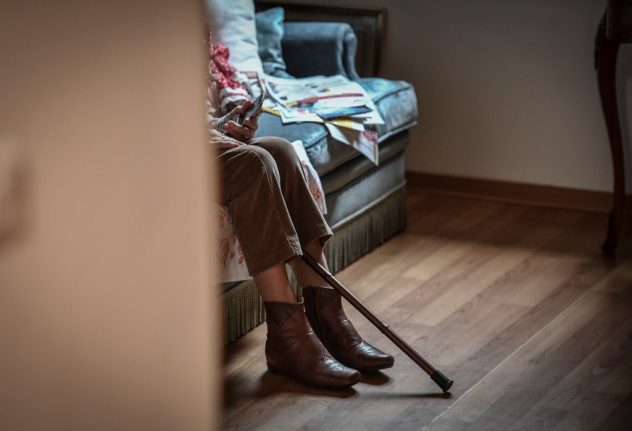 Illustration photo: AFP
Brenda Henderson first came to France as a student in 1968 – the year the country took to the barricades to protest at injustice. Now in her 70s and seriously ill with Parkinson's, she has retained that fighting spirit and is now engaged in the battle for citizens rights for British people in France after Brexit.
From her home in Dordogne, she runs regular coffee mornings for other British people to help them navigate the complex systems for residency and healthcare.
She said. “I have heard some heartbreaking stories – the man who spent two years waiting and worrying about his residency and whose wife died suddenly before they got it, a friend who is British but was born in South Africa, another woman who tried to go back to the UK but couldn't get a place at any nursing homes for the care she needs, it's so sad.
READ ALSO France's new carte de séjour residency website – how does it work and what do I need?
“I suffer from Parkinson's  so I get very tired but I still feel I need to help people. Some don't have very good French so find accessing the system hard, others are put off by the bureaucracy and find the questions very personal and intrusive and of course people are proud and don't want to feel that they're taking handouts from the state.
“Ultimately I think it will be financial problems that drive a lot of people back to the UK. Pensioners have already lost a lot because of the fall in the value of the pound and I think we all know people who are barely making ends meet, who don't go out any more. I'm quite proud of how I can budget but it does get exhausting after a while and a lot of people end up very isolated because they can't do things like go out for dinner or go down to the bar for a drink.
“I have my citizenship interview next week, so hopefully my residency is sorted, I've been revising a lot of French history and trying to remember the words of the Marseillaise.”
Brenda was one of dozens of British people who shared their concerns at an outreach meeting in Dordogne organised by the British Embassy.
As the current Brexit date approaches, and with little sign of a deal being made, many who have lives in France for decades are increasingly worried about how they will stay in the country and – a major concern for many – whether their healthcare will continue to be paid for.

Although healthcare is obviously a concern for everyone, it is a particular worry for people who are suffer from serious illnessses – worried that life-saving medication and treatment  could be suddenly halted or become unaffordable, and knowing that with pre-extisting conditions private health insurance is not an option for them.

Francis Towers, also in his 70s and originally from Yorkshire, said: “I have cancer so I need ongoing treatment plus scans and colonoscopies – all expensive stuff.

“My wife Kathleen and I have both had cancer while we've been here so no private health insurance would cover us now.
“We got this horrible letter from the NHS, really quite nasty, telling us that we would only have cover for 6 months in the case of a no-deal Brexit although we feel reassured by what we were told at the meeting. We've lived here for half our married lives so we don't want to go back to the UK but we were fearing that we would have to.
“We do have a carte de sejour though, we got one a long time ago, well before Brexit. In those days they said you didn't need one, but it was when Kathleen had cancer so we wanted a bit of reassurance about our status and we got one, although we had to go through all sorts of battles and get the French state mediator involved. But thank goodness we did.”
In terms of residency, the Towers are among the lucky ones. Time and again people spoke of trying for months to get an appointment for a residency application at their local prefecture, only to be find they were all full.
Barbara and Neville Davies said: “We don't have a carte de séjour because we've not been able to get an appointment at the préfecture, for months now it has just been saying that there are no available appointments. Its so frustrating because we have friends in other parts of France who have got their appointments and got their cards without any trouble.
“We're both pensioners on the S1 and very worried about healthcare as we both have health conditions,  Neville has cancer that he will need treatment for over the next five years.
“We're especially worried because we have been through something similar before when retirees were told they didn't have the right to a carte vitale. We looked into private health insurance then but no-one would cover us because of our pre existing conditions. So although we are reassured by the embassy telling us we will be covered for two years, we know how suddenly these things can be taken away and if you're reliant on ongoing treatment it is very worrying.”
The NHS has written to all S1 holders in France telling them that they will only be covered for six months. At the Perigeux meeting, Embassy minister Matthew Lodge said that pensioners in France would have their costs covered for two years as laid down in France's no-deal law, while the British and French authorities try to come to a bilateral agreement.
But in a no-deal exit British pensioners will likely have to sign up to the PUMa health scheme which could see them having to shell out contributions, known as social charges from their pensions. Many may not be able to afford them.
Gill Sander said: “Although we were reassured by the two year promise – what happens after that? Really it's just more waiting, we've been in limbo for the last three and a half years and now we're just told to wait another two years and hope that things will be worked out after that.
“It means we can't plan, we don't know what will happen about family visiting and we have no voice, no one to speak for us.”
Her husband Graham added: “For me the biggest sadness is just leaving the EU – to know that the next generation will not have the opportunities that we have had to work, to travel, to study and to make our homes where we want. It's a great sadness.”