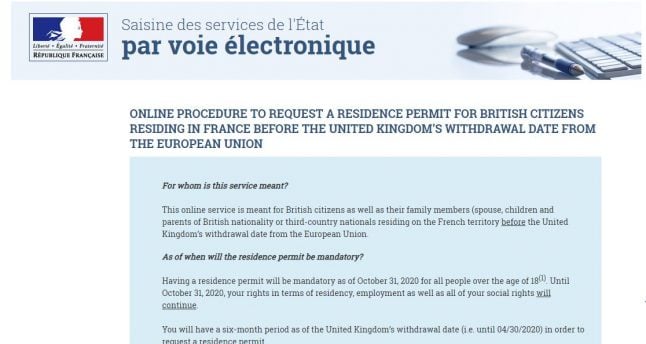 UPDATE: The French government has now announced that there will be a different system in place – click here for the latest information.

The site went live on Wednesday evening in a move that seemed to take most people by surprise given that it wasn't expected to be launched until after the scheduled Brexit date of October 31st.

The government says that it is still in its early phase so there may be some initial teething problems, particularly as a larger number of people attempt to access the site, but here is what we know so far.

The website is designed for all British citizens living in France before Brexit day. It's a centralised website although once applications are made they are handled by individual prefectures.

The Local understands that while website is accepting applications from Britons, nothing will be processed until the UK actually leaves the EU, whenever that may be.

What's the reaction been?

It's early days yet, the Local understands that this is a test version and the French government will be taking feedback about any problems, but we found it relatively straightforward to use, it's mostly boxes to either tick or fill in and the fact that there is an English version will set many people's minds at rest.

Kalba Meadows from citizens rights group France Rights said: “My initial comments – and people in the group are still going through the site and commenting – are firstly that it's it's based on two presumptions – one is a no-deal Brexit, and the other is that the date of a no deal Brexit would be October 31st.

“When people are being asked to apply for a card as a third country national for which they would have to pay it seems inappropriate to begin an application process at this point. What happens if there is an extension – especially a long extension?

“For those with a carte de séjour permanent it looks to be, as promised, very straightforward

“It's good also to see a contact email for questions BUT how will this be covered as it could be inundated.”

For people in a complicated situation there is an 'any other comments' box at the end, so you will have a chance to explain anything not covered by the tick box.

Mike Harlow from Remain in France Together said: “We are pleased to see that the new system has been introduced ready to use for after the 31st October – although we continue to hope that it is not required – and that the application process appears simple, streamlined and with an English language option.”

“Unfortunately, it is aimed at those with access to the internet, so there will be many vulnerable UK citizens who need to be reached and supported in their applications, and in a short timescale of 6 months, and this is something that RIFT is actively working on at the moment, trying to find solutions for UK citizens in that position.”

You can access the site via the French government's online services portal here. It is available in both French and English. There is no need for a trip to the préfecture, applications can now be made online. Photo: AFP

And how does it work?

Well the basic process is the same as when people made in-person applications at their local préfecture in terms of the documents you need to supply, but the process has been considerably streamlined.

You first accept the terms and conditions and say whether it's the first time you have applied for a residency permit.

If you have been here for less than five years you need to fill in the online form with your personal details – name, age, address, marital status etc – then state what category you fall into – employed, self-employed, student, retired, unemployed or otherwise economically inactive.

You then need to upload supporting documents depending on which category you fall into, but for people working those documents include passport, proof of residency work contract and last payslip.

If you have been here for longer than five years you enter the date of your arrival then it asks you to upload documents including copy of passport, proof of residency and something to prove your arrival date, which may be an obstacle for some.

Of course the big difference between a website and a physical appointment is that all your supporting documents – passport, work contract, utility bills etc – need to be scanned and then uploaded.

The good news is that you don't need to buy expensive hardware, there are lots of free smartphone apps that will allow you to scan documents then upload them to your computer.

People make their initial application online, and each application will then be passed on to the préfecture where you live for it to be evaluated.

Once the application is made online you don't need to do anything else until you are contacted.

If your application is complete you will be “contacted by email to arrange an appointment with your préfecture to finalise your procedures” which is likely to involve going to your local préfecture to give your fingerprints, if you have not already and also pay the €119 fee.

If your application is not complete or is unclear, you may be contacted with a request for further information.

People who have completed the application online will get an acknowledgement email and a reference number, but there is no mention made of how long it will take to process the application. It could well vary according to local area, as some préfectures will get a lot more applications than others.

Who is it for?

The site is for British people already living in France.

People who have been living here for more than five years and already have a carte de séjour permenant can simply swap it for the new card using the site, everyone else – including people who have no card and people who have the short-term 5-year card – has to make a completely new application online.

What will I need?

In terms of what you need to supply it's difficult to say at this early stage as every different category needs to supply different things and people who are applying for permanent residency are asked for extra documentation in terms of their proof of means and health cover.

For those who have been here over five years that means getting an “attestation de droits” for healthcare cover which can be obtained via the Ameli.fr site or via your local CPAM office.

You will definitely need your passport though and other good things to have scanned and ready are anything that provides proof of your arrival date in France, proof of residency such as utility bills, proof of work status such as employment contracts and payslips, proof of means such as tax returns and bank statements and document relating to health insurance if you have it. If you complete the application you get this message, although that does not mean that your application will be successful

The first thing to remember is that there is no tearing hurry and no need to panic if all your documents are not to hand right this second.

If Britain leaves the EU with no deal then Brits get a one-year grace period to sort out their residency status – although applications must be made within six months of Brexit day. If the UK leaves with a deal there will be a transition period that will last until at least December 2020.

Interestingly, in terms of the dates it gives the French site seems to be assuming that Britain will leave without a deal on October 31st, although it could be that they are simply using the worst case scenario.

The site states that: “Having a residence permit will be mandatory as of October 31st, 2020 for all people over the age of 18. Until October 31st, 2020, your rights in terms of residency, employment as well as all of your social rights will continue.

“You will have a six-month period as of the United Kingdom’s withdrawal date (i.e. until 04/30/2020) in order to request a residence permit.”

But whatever happens there is plenty of time, so although it's good to get things ready, there really is no need to panic.

Have you used the site? How did you find it? Tell us your experiences and we will share your feedback (anonymously) with French authorities.