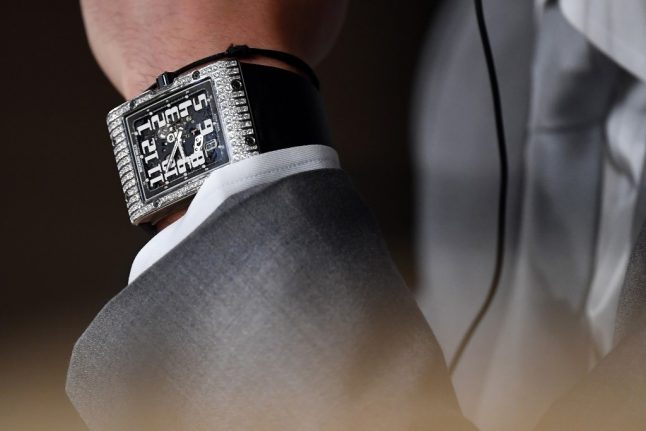 A Richard Mille watch similar to the one that was stolen. Photo: AFP:

The theft of luxury watches in the fashionable districts of Paris is quite common. And it is a scourge which the Parisian police is taking very seriously – although  there aren’t many watches worth €800,000.

On Tuesday, the Paris Public Prosecutor's Office referred the matter to the BRB (Brigade de répression du banditisme) of the Parisian Judicial Police to conduct this investigation into the violent aggravated theft of a luxury watch. The robbery took place on Monday evening at 9:30pm on Avenue de Friedland, near the Champs-Elysées.

A 30-year-old Japanese businessman who was staying at the Napoleon Hotel, a 5-star Parisian establishment near the Arc de Triomphe, was smoking outside with another customer.

An individual, about 1.80m tall and wearing a parka, appeared, asked the Japanese customer for a cigarette. It was a ruse to check the brand of his watch. The thief then grabbed the man’s wrist and ripped off his watch.

He immediately fled to Haussmann Boulevard.

The victim, uninjured, filed a complaint. The Swiss watch, from the Richard Mille luxury brand, model “Tourbillon diamond twister” is valued at €800,000.

However, the thief demonstrated that he is not in fact a criminal mastermind as he managed to lose his mobile phone during the escape. The police are optimistic that it will be rich in DNA and information.

This year, in Paris and its suburbs, 71 people were assaulted for their luxury watches between January 1st and September 1st. On Thursday August 29th alone, four attacks were recorded. The victims were targeted by experts who were able to recognise the models at a glance.