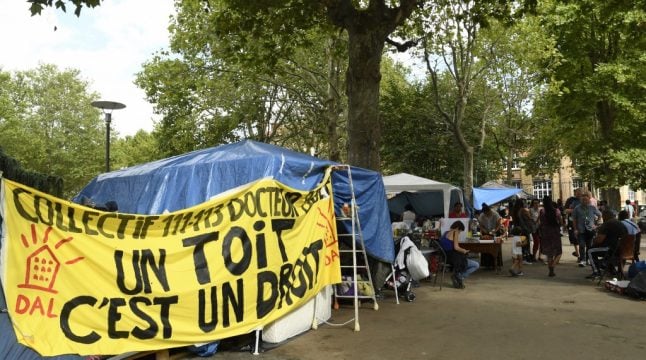 Photo: AFP: refugees stand next to a banner reading "A house is a right" on the forecourt of the town hall of Saint-Ouen, near Paris, on August 8, 2019.
Asylum seekers, immigrants, refugees, foreigners, deported… What percentage of the French population comes from immigrants and how many immigrants end up becoming French?
Here are the figures that tell the story of immigration in France:
1 – Born abroad
Since January 1st 2019, France's population has stood at 66.9 million. According to the latest National Institute of Statistics and Economic Studies figures, 6.5 million immigrants lived in France in 2018, representing 9.7 percent of the total population. This figure has increased steadily since the end of the Second World War (5 percent in 1946). However, of these, 2.4 million acquired French nationality by decree or marriage (110,014 last year).
This means that the actual foreign population living in France amounted to 4.8 million people in 2018 (or 7.1 percent of the total population).
This consisted of 4.1 million immigrants who had not acquired French nationality and 0.7 million people born in France of foreign nationality.
Add into this the 1.7 million people who were born of French nationality abroad, but returned. With the 6.5 million immigrants, this means a total of 8.2 million people living in France were therefore born abroad, or 12.3 percent of the population.
2 – Foreigners

By December 31st 2018, the Minister of the Interior Christophe Castaner had identified 3,231,823 foreigners in the country, corresponding to the number of valid residence permits at that date.
According to the government, 255,956 residence permits were issued to foreigners in 2018, including just over 83,000 for students, which set a new record.
3 – Asylum applications.
Last year, 123,625 people applied for asylum in France, up 22.7 percent on the previous year and in constant progress since 2015, according to data from Ofpra (Office français de protection des réfugiés et apatrides), the body responsible for examining these cases. Afghans, who numbered 10,370 in 2018, are the highest number of claimants, in front of Albanians and Georgians.
The rate of admission to refugee status is 26.6 percent, slightly down (27.2 percent in 2017).
During the first eight months of 2019, the demand had increased by a further 7 percent, according to government figures.
4 – Failed asylum seekers
In 2018, only 12.4 percent of those obliged to leave French territory actually left. This amounts to just 15,677 cases out of 90,000 and most of them occurred in France itself.
For example, only one third of the removal orders against Albanians and Georgians have been implemented.
5 – Refugees
By the end of 2018, there were 278,765 people “under protection” by Ofpra. Of these, 225,544 had refugee status, 51,728 were granted “subsidiary protection” – which entitles them to a one-year renewable residence permit – and 1,493 were recognised as stateless.

In total, 46,838 new protection orders were issued in 2018.
READ ALSO:
6 – The “safe” countries
The asylum application from Albania and Georgia, the so-called “safe countries” whose nationals have respectively second and third most applicants, constitutes an “anomaly”, says Castaner.

9,683 Albanians applied for protection in France in 2018, compared to 7,005 Georgians. For the Georgians, the number represented a huge 256 percent growth in one year. Between January and August 2019, the momentum continued and Georgian demand increased by 61 percent compared to the same period in 2018. This is despite the fact that the acceptance rate of their applications is very low: 8.4 percent for Albanians, 4.6 percent for Georgians.

Among the reasons given for immigration, family is by far the most important for the granting of residence permits, with 90,074 people successfully gaining permits on this basis. Foreign students represented 83,082 people in 2018, immigrants for “humanitarian” reasons 33,981 and economic migrants 33,502.
8- Resettlement

Last year, 5,565 people benefited from the “resettlement” programme, in partnership with the United Nations High Commissioner for Refugees, which represents, for example, torture survivors.

In 2018, 19,957 people were officially  “deported”, according to Castaner. 4,775 others were involved in “assisted voluntary departures” as part of a procedure allowing them to receive a sum of money in return for a return to their country.
10 – Citizenship
France has one of the shorter waiting times for citizenship, at just five years – but they must be continuous. If you leave for more than six months during that time, you have to start again.
But this does compare favourably with countries like Norway (seven years), Germany (eight years), and Italy and Switzerland (both require 10 years).