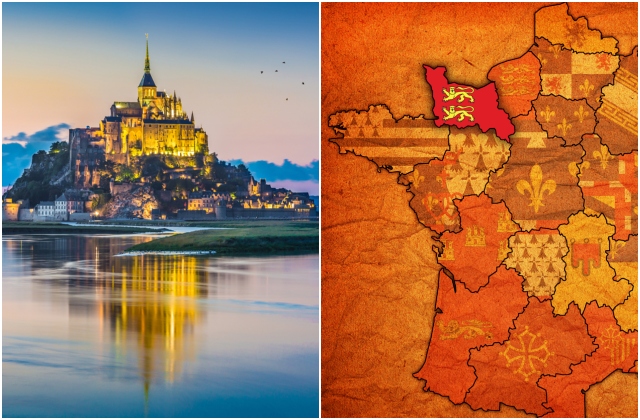 This northerly French region, which gets its name from the old French word Normanz (Northmen), was once a great European power .

Besides the Norman conquest of England in 1066 and the subsequent subjugation of Wales and Ireland, the Normans also expanded into southern Italy, Sicily, The Canary Islands (14th-century Norman explorer Jean de Béthencourt became king of The Canary Islands) and the Crusader states of Asia Minor and the Holy Land. Lower and Upper Normandy have always been friendly rivals

For hundreds of years, Normandy was historically but not officially divided into two parts: Baisse Normandie being the more rural region and Haute Normandie capitalising on its proximity to Paris to become more industrial.

Even Roman Emperor Julius Caesar drew a line between the Armorican Normans of the West and their easterly counterparts, and these cultural divides live on to this day.

In 1956 Basse and Haute Normandie were officially divided into two administrative regions. It wasn’t until 2015 that François Hollande’s government reunited the two Norman regions into one.

If you were paying attention in history class you’ll remember that one of the most pivotal moments in World War Two – the D-Day landing– happened all along Normandy’s coastline.

Normandy was part of the German occupied zone of France at the time that allied forces from the UK, US, Canada and Free France landed on the Normandy shores such as at Omaha beach on 6 June 1944 to defeat the Nazi occupiers. It's blessed with natural parks

As the map below shows Normandy is blessed with regional natural parks. Out of the 47 in mainland France and Corsica, Normandy has four and they are well worth a visit.

The parks are the Marais du Cotentin et du Bessin in the west of the region, Nomandie-Maine and the Perche in the south and the Boucles de la Seine Normande, which covers the picturesque region where the River Seine winds its way to the sea. There are hills but no mountains

This map shows the topography of Normandy, which is hilly is the south but much flatter towards the coast. It’s definitely worth a visit

There’s heaps to see and do in Normandy, from visiting the majestic Mont Saint-Michel island monastery, to Caen’s churches or the Bayeaux Tapestry.

There’s also nearly 640 kilometres of coastline to explore, including impressive limestone cliffs and some of the beaches that were the scene of the D-day disembarking. This old map postcard of Normandy's Calvados department shows just how much there is to see in that area alone.

The train network is top notch

Given the region’s popularity, The TER Normandie railway network is well equipped and efficient.

From Paris there are regular trains heading up to Rouen, Le Havre, Dieppe, Caen, Bayeux, Cherbourg, Évreux and Lisieux, with some journeys requiring a change of trains.

If you’re an avid cyclist you’ll be happy to learn that there are plenty of cycle routes available in Normandy, mostly in the west. Click here if you want to find out in more detail where you an take your vélo out for a spin. In fact if you want to visit Normandy without a car then this is the map for you. And Normandy with cars

This map shows the main road links including the Autoroutes. Normandy is one of France’s main culinary hotspots, and that’s saying something.

From the lamb of the salt marshes of Mont Saint-Michel, to Norman cow's milk, Cherbourg lobsters or Andouillette sausages from Alençon, authentic Norman dishes are known and loved across the country (not forgetting Camembert, of course).

To plan your next gastronomic trip in Normandy, here is some extra info relating to the map. If seafood is your thing, it’s also worth noting that Normandy is the leading producer of oysters, mussels and scallops in France.

In fact, a visit to Normandy wouldn't be the same without some moules marinières, or moules frites (steamed in white wine and served with chips).

If you’re a cheese lover you might know this already – Camembert was first made in the late 18th century in the Norman village of Camembert.

The whole region now has a handful of officially licenced Camembert producers, so if you’re after the best of the creamy stuff from the source, here’s a map with their names and locations.

Norman beer is causing a stir

If you’re a beer lover heading to Normandy, you’re in luck. According to this map by Les Amis de la Bière Normande (Friends of Norman Beer), there were a total of 37 breweries across the region in 2016.

There is also the Norman Beer Festival taking place in March/April every year as well as many other craft beer tasting events.

And it's famous for its apple and pear ciders

The map below shows the main production areas for cider including the official AOC label of Pays d'Auge and the AOC label of Comfront for the drink Poiré which is similar to cider but made with pears.

“In France, for cider, there are only two registered designations of origin which one, the A.O.C.Pays d'Auge, is produced exclusively in Normandy, the other being the A.O.C. Cornish neighbours Bretons,” reads the site Normandie Degustation Terroir.

“Although the Pays d'Auge cider is a regional emblem, Normandy has other areas of production classification and which include cider of Normandy I.G.P, ciders of the Bessin, the Cotentin, the Perche and the Bocage Virois. “ There’s a cider trail for the road trippers

Head to Normandy’s hilly Pays d'Auge region between Caen and Rouen for “La Route du Cidre” (The Cider Route), the perfect excuse to get a bit merry while learning more about the region’s staple tipple and taking in some amazing scenery.

And a pear cider trail as well

Exchange fermented apples for pears on the La Route du Poiré, a pear cider trail in the south-east of Normandy.
Next time you’re in the region follow the map below and go on a road trip which will include a scenic landscape of pear orchards, the chance to taste some magnificent pear cider and to meet the people making this traditional Norman drink.