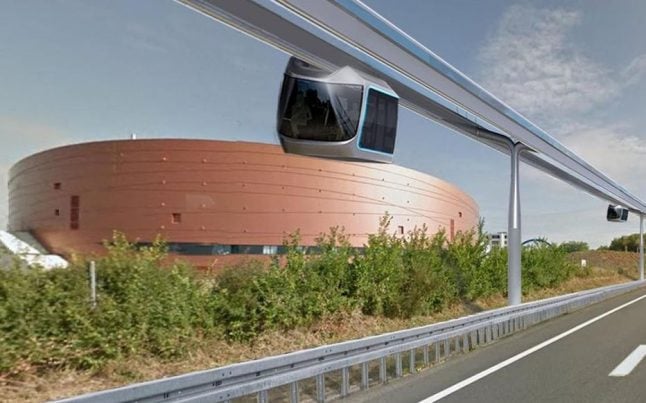 It’s called Supraways, an over-ground, solar-powered take on the subway that will carry seven to nine passengers in each of its carriages at speeds of 50km/h.

According to its designers, the network would operate 10 metres above ground on a series of interconnected city bridges, with a separation of 35 metres between each pillar.

It’ll reportedly be cheaper to build and to operate than any new metro system, without even the need for a conductor in each Supraway.

So is all this futuristic transport talk actually based on tangible facts?

The French city of Lille will soon have the answer.

Hauts-de-France’s Real Estate Federation met with the head of Supraways in late September, agreeing to fund a feasibility study for a ‘supra’ line between Lille city centre and Lesquin airport seven kilometres to the south east.

Initial estimates point to it costing €10 to 12 million for each kilometre built, far lower than for any new metro line (priced between €100 to €300 million) or another tramline (almost €25 million).

Another line connecting Lille to the towns of Douai and Lens (both about 40km away) is included in the proposal as well. Lille’s Grand Committee and the city’s Chamber of Industrial Commerce (CCI) have also backed the construction of the first Supraways lines but the final decision rests in the hands of Hauts-de-France’s Regional Council.

Despite ranking as one of the best cities to live and work in France according to our readers, Lille has struggled with traffic problems for some years now.

The city itself has only around 230,000 residents but it’s the financial hub for a metropolis of 1.1 million, which helps to explain why every day over 300,000 workers commute by car into Lille.

READ ALSO: Why Lille is France's most underrated city

Previous measures such as the introduction of an “inverse” toll (which would have paid drivers who commuted on public transport and charge those who didn’t) were dropped due to their unpopularity.

Lille is one of the seven French cities together with Paris, Lyon, Grenoble, Marseilles, Toulon and Nice where traffic pollution has forced local governments to take action on days where nitrogen dioxide levels were a public health hazard.

The introduction of a supraway line in Lille could see air quality improve in the northern industrial city as the vehicles run entirely on the energy produced by the solar panels each pod/carriage has on its roof, with no carbon dioxide or air pollution.

Another factor that may help convince Lille commuters to back the supraway is the fact that each seven to nine-person shuttle takes its passengers directly to their preselected destination without other stops.

Travellers would simply have to choose the right pod to travel in, making their trip time three times shorter than in any other transportation mode.

“The exploration of a second level of transport has already begun,” reads Supraways's website in reference to other aerial train networks in Bangkok, Dortmund, Miami and other cities around the world.

“Now it's a case of exploiting this trend intelligently.”