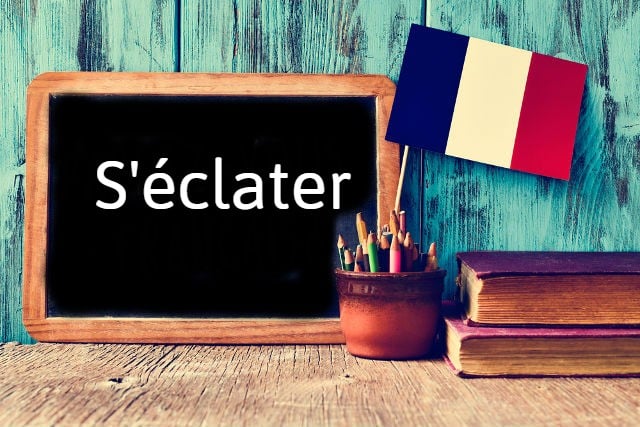 Why do I need to know s'éclater?

Because sometimes you need to be really enthusiastic about an experience. We've given you plenty of vocab to complain in French (and explained how the French themselves got their reputation for ceaseless grumbling) but today is about enthusiasm.

The literal translation of the verb s'éclater is to explode or to burst, but if you hear it in casual conversation it's more likely to mean a great time or a brilliant experience. It's roughly equivalent to “having a ball” in English or “having a great laugh” or “having great fun”.

So if you're trying to convince a friend to come to salsa dancing classes you could say C'est rigolo et on va bien s'éclater! – It's going to be loads of fun!

Comment s'est passé ton voyage à Hambourg? C'était génial, on s'est éclatés! – “How was your trip to Hamburg? It was great, we had great fun!”

If you use it with “we” you would say nous nous sommes eclatés – “we had great fun” or with just “I” it would be je me suis éclaté – “I had a ball”.

Or you could ramp it up a bit more by saying On s'est vraiment éclatés meaning “we really had a great time”.

And if you want to talk about something you used to do in the past that was fun, you could say On y allait quand j'étais enfant, et on s'est toujours éclatés, meaning “we used to go when I was a kid and always had a great laugh.”

It's certainly a casual phrase, and more well used by young people, but it's a good way to convey a bit of cheery enthusiasm for something.

In its more serious sense it can mean to explode in both the literal and the metaphorical sense, although if you're talking about a bomb exploding you would be more likely to use the verb exploser.

Les conduites pourraient geler ou même éclater si on les laissait du côté froid de l'isolant – The pipes could freeze and burst if they are left outside the insulation.
Quand la crise economique va-t-elle éclater? – When is the economic crisis going to break?