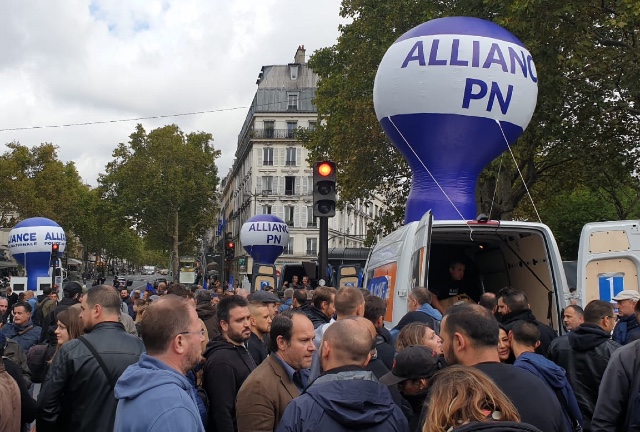 It’s the first time in nearly 20 years that French police officers will leave their uniforms at home and take part in their own protest.

Union leaders are hoping to mobilise between 15,000 to 20,000 police officers to take part in the “march of anger” in Paris on October 2nd.

What are French police so angry about?

It’s a cocktail of despair and anger at their degraded public image, the spike in suicides in the force (48 this year alone), worsening work conditions and their own concerns over Macron’s controversial pension reforms.

For many it’s become impossible to prevent all this stress and desperation from seeping into their private and family lives.

The poster from the Alliance union explains what the police are demanding.

An improvement in the quality of working conditions, better work benefits to help with housing, transport, childcare and health insurance, plus guarantees over pensions and a tougher criminal justice system are listed among their demands. Why have French police become so unpopular?

French police have gone from “heroes to zeroes”, one police officer who preferred to remain anonymous told Le Parisien.

It’s a statement that sums up the public image decay of ‘le policier’ in France, badly hit by accusations of excessive violence used against “yellow vests” during their weekly street protests (45 consecutive weekends of demonstrations so far) and other marches across France where radical groups infiltrate the mostly peaceful crowds.

OPINION: French police are not just thugs, they are being placed in an impossible situation

As a result, police are seen by many in French society as ‘the bad guys’, enough of a reason for many officers to ask their children not to tell their classmates what their parents do for a living.

“There is a deep sense of despair,” David Le Bars, secretary-general of the SCPN-Unsa police union, told AFP.

“All of the unions know that the police are sick with worry.”

Does this explain the high suicide rate in the force?

France has grappled with the problem of police suicide for some years but the force’s drop in popularity is certainly contributing to the rise in officers taking their own lives.

A shocking study released in April 2019 found that one police officer in France takes their own life every four days.

“It's a massacre,” Thomas Toussaint from the Unsa-Police union told the French press. Another report released in 2018 showed that France’ police force faces terrible working conditions including gruelling hours, as they were being drafted more than ever due to terror attacks and the migrant crisis.

Add the weekly “yellow vest” protests to the mix and it’s easy to see just how overworked French police have become, constantly at the mercy or irregular schedules and on average only able to take one weekend out of five off.

How does Macron’s pension reform affect them?

French police officers who have served at least 27 years benefit from a bonus pension contribution every five years.

Interior Minister Christophe Castaner has insisted he would fight “until the end” for this special provision for the police to be kept but under Macron’s complex pension new reforms this bonus would depend on the dangers involved in the officer’s work.

“Castaner doesn’t have all the cards in his hand; he’s playing a game of poker with the president and prime minister, who control the purse strings,” Yves Lefebre, secretary-general of the Unité-SG-FO union, told AFP.

“We’re already thinking about what action we will take after October 2nd,” he concluded.