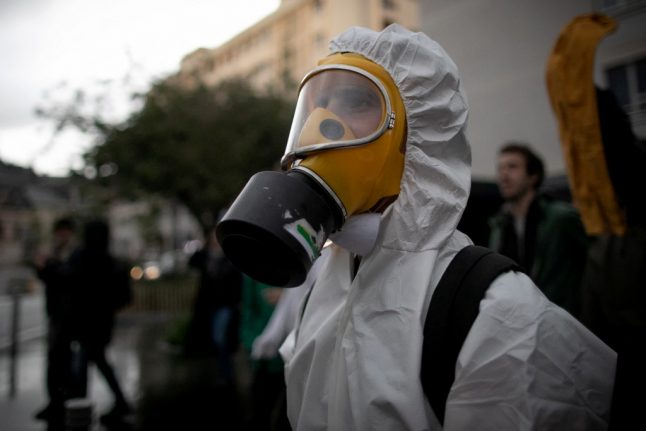 On Tuesday night around 2,000 people from Rouen and the surrounding areas took to the streets, demanding that authorities tell them exactly what burned and what the risks are. Their demands come as people have reported black tap water, a thick layer of soot in some areas and a suffocating stench that is causing nausea and vomiting.

Local farmer Marie Benoit, 60, brought a bottle of black rainwater that he said fell in the nearby commune of Bray.

“The smoke cloud passed over, the rain was black and the cows drank black water. We are devastated. There's such a lack of information that we wonder if there's anything being kept from us,” he told France Info. Thousands took to the streets in Rouen to demand answers. Photo: AFP

In response to the growing anger, France's Prime Minister Edouard Philippe has promised ” complete transparency' and the préfecture of Seine Maritime published on Tuesday evening a list of the 5,253 tonnes of chemicals that burned in the fire.

The Lubrizol factory, owned by US billionaire investor Warren Buffett, is classified as a Seveso site, which means a high risk industrial process. It produces toxic chemicals, mainly additives for oils and lubricants.

READ ALSO MAP: Where are all the high risk chemical plants in France?

Pierre-Andre Durand, local authority leader in Seine Maritime, told a press conference on Tuesday that tests conducted a day after the fire showed that fears of asbestos fibres from the plant's destroyed roof contaminating the air had proven “unfounded.”

He added that preparations were being made to remove 160 barrels of chemicals in a “delicate state” from the state.

Philippe visited the factory on Monday night in a bid to reassure people on the contamination risks.

Local authorities closed schools and nurseries and advised residents to stay indoors on Thursday as the fire raged, but it was not until the weekend that environment minister Elizabeth Borne visited Rouen and admitted that the town was clearly polluted. The oily soot residue has been see on crops in local communes. The sale of all food products from the area is now banned. Photo: AFP

On Monday, authorities have banned the harvesting of crops or the sale of animal products from a wide swathe of countryside surrounding the plant, telling farmers than any exposed produce would have to be destroyed.

Around 100 communes are affected by the ban and more than 1,800 farmers whose fields were tainted by the oily soot, though the government promised quick compensation for their losses.

One farmer told French media that over four days he had been forced to throw away 14,000 litres of milk from his dairy herd.

At least five schools in Rouen either closed or told parents to come and fetch their children on Tuesday over the fallout from the fire.

One school reported an “unpleasant smell” and said students had been “complaining of nausea and itchy throats and eyes.”

Many people in the town are still wearing masks in an attempt to protect themselves from chemicals in the air, the the police union Alternative Police has reported that several officers who were at the scene have since been signed off on sick leave. One local farmer told French media that he had to destroy 14,000 litres of milk. Photo: AFP

Older people and those with health problems had been warned to stay inside.

Officials also deployed berms along the Seine river, which runs through the city, to try to prevent inky black deposits on the water from flowing downstream toward the Channel at Le Havre, a major fishing harbour.

The cause of the blaze is not yet known.

Lubrizol said witnesses and video surveillance indicated it began outside the factory's fences.