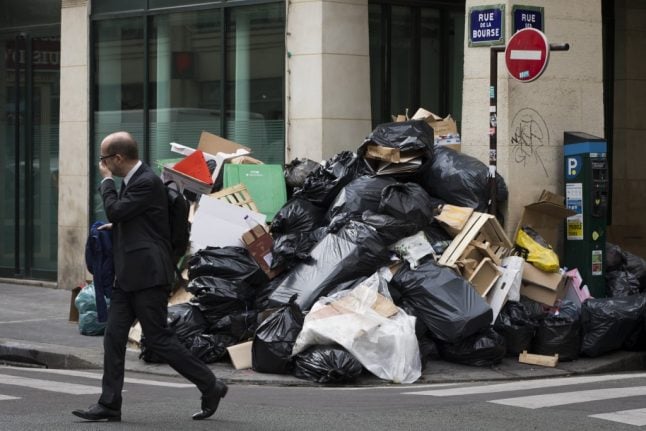 Paris is home to a huge international community all of whom have chosen, for one reason or another, to make it their home.

And in general they're pretty happy to have done so, citing the city's extraordinary architectural beauty, fascinating history, lively atmosphere and great social life as among their favourite things about the City of Lights.

But when we asked them for the one thing they would change about Paris given the chance, the frankly grubby state of the place emerged as the overwhelming concern.

Elections will be held next year for the Mayor of Paris and already it's shaping up to be a tight three-horse race. So if any of the candidates are reading – this is what our readers want you to tackle first. Joel Halpern, who lives in Paris' 12th arrondissement, said: “Clean, clean, clean. Particularly around the train stations. These are our front doors, and they are a wreck. Drunkenness, homelessness, garbage, etc. And rarely is ever security outside the station. So, for women and the elderly, it is a major point of concern.”

Charles, who lives in the 11th, asked simply that authorities “make the city cleaner” and wants a city “free from rats”.

While Laura added that “the smell of urine, the homeless people smoking crack at the Metro stations and the rubbish and graffiti littered everywhere” were the worst things about the city.

Paris' levels of hygiene have certainly been in the spotlight recently, but current mayor Anne Hidalgo pointed out that the city spends almost €600 million a year on cleaning, and has called for Parisiens to start taking responsibility and clean up after themselves.

The slightly pungent odour that hangs over certain parts of Paris has long been a concern for authorities, with extra spending on public toilets and pissoirs in an attempt to stop people – mainly men it has to be said – relieving themselves in the streets.

But it's not just men that are a problem, the city's dogs (or rather their owners) were also under fire for fouling the pavements.

Canadian Daniel Clarke said: “If more people started picking up after their dogs, maybe there would be a stronger argument for allowing dogs in the parks.” The Paris Metro system is one of the world's most reasonably priced public transport system and between that and the RER it provides excellent coverage of the city. However it is not without its problems, with a lack of air conditioning turning certain lines into a hellscape during the summer months and Metro users being seen as easy picking by the city's pickpocketing gangs.

Laura added: “We need to stop the increasing number of pickpocket gangs around the city and Metro system. It’s scary and unsettling when you are travelling with small children and have to protect your belongings so securely. It is also horrible seeing it happen to unsuspecting tourists so often.”

On the surface there are also some problems, particularly with electric scooters.

Tad Frizzell said: “Getting the scooters off the sidewalks (parked or moving) would improve life in Paris.”

Manant, who lives in the 13th arrondissement, wanted the Vélib system improved while Patricia from the 9th called for a ban on motorbikes.

While several others wanted traffic restricted or banned altogether in the city centre.

These problems are of course not new to city authorities, and current mayor Anne Hidalgo has brought in several measures including tougher restrictions on the use of electric scooters and a ban on older diesel cars in the centre of Paris.

Another one of her projects is major works to improve the experience for cyclists in the city. Although this attracted some grumbling about the large number of roadworks taking place in the city, several Local readers cited the cycling facilities as one of their favourite things about Paris.

Kath Limroth who lives in Marais said the bike paths were her favourite thing, while Sarah Schilling said: “Biking has opened up the city to me, and is often faster than public transport.” 3. Tighten up the smoking rules

Paris' famous café terraces are a favourite with locals and visitors alike, but the presence of smokers on the terraces puts many people off.

Claire Long, of the 6th arrondiseement, said: “A ban on smoking would be pleasant since we love to keep our windows open on nice days. Too many people smoke right outside of buildings and businesses, creating a cloud that hovers.”

Although they did have their gripes, most readers were keen to stress that overall they loved Paris, with the city's rich history and the care taken to preserve the architecture and historic sites among the things that most people cited as their favourite thing.

Beautiful parks, the famous café culture, the food, the street scene and the wide boulevards were among the other highlights mentioned.

Do you agree that these are Paris' top priorities? Head to our Facebook page and join the discussion.