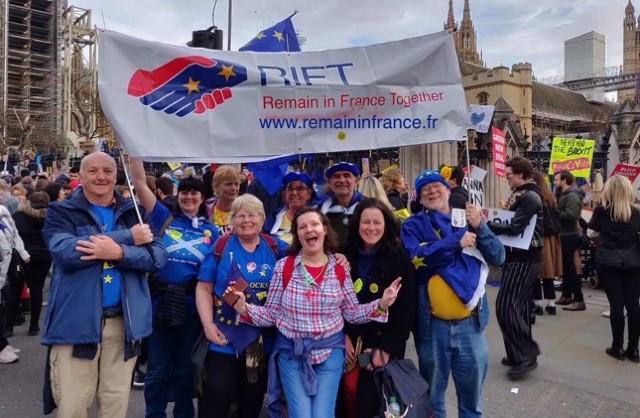 Citizens rights group Remain in France Together (RIFT) and campaign group Europeans United are calling on as many Brits as possible to make the trip from France to make their voices heard in London in October.

There are two major campaign events planned in London for October. The first is the Rally 4 Our Rights on October 12th and is a rally (rather than a march) to be held in central London to demand that the rights of British citizens in Europe, and EU citizens in Britain, be protected after Brexit. The second event is the Let us Be Heard People's Vote march on October 19th, which is calling for a second referendum on the subject of Brexit to be held in the UK.

Leigh Chandler from RIFT urged as many people as possible to make the trip.

She said: “The rally on October 12th it will be more a sombre affair than a march (in fact it will be more static, so ideal for those unable to walk well) with guest speakers and a planned ‘open mic’ session to allow participation from the public.  The event has quickly picked up traction, and the organisers are expecting a very healthy turnout of supporters.

“RIFT and Europeans United will also be there on October 19th with many UK in EU who want to march and protest against Brexit.

“The organisers are expecting huge numbers of people as this may be the final protest before the expected day to exit Europe on October 31st. These marches although huge (the one earlier this year surpassed 1 million people) are extremely good natured and well organised.”

For more information on the events, or how to get involved if you cannot travel to the UK, visit the Europeans United Facebook page.

For those concerned about how Brexit will affect them, there is information on residency, healthcare and travel on the RIFT page and also in our Brexit section.

There are also a series of RIFT groups in different areas of France run by people living in those areas offering advice and support.