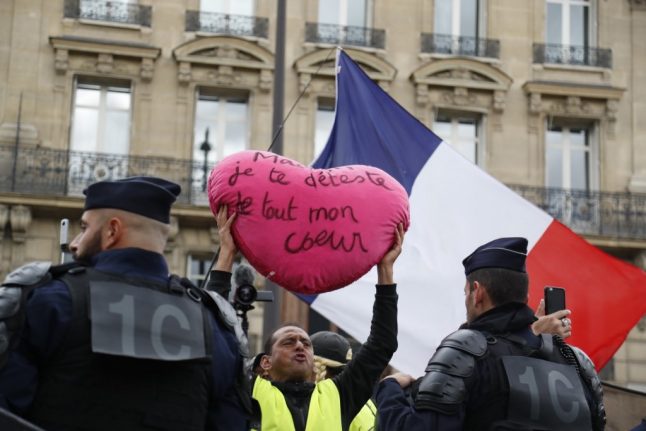 A "Yellow vest" protester holds a heart-shaped sign reading "French President Emmanauel Macron I hate you with all my heart" in front of the Galeries Lafayette. Photo: AFP

At least one arrest was made during the march, which started in the afternoon. It was led by demonstrators brandishing a giant banner which said “Fed up of surviving. We want to live.”

They also burnt a parasol in front of a McDonalds outlet.

In the capital Paris, some yellow vests joined a climate protest march.

The weekly protest came two days after the French government unveiled a draft 2020 budget with more than €9 billion euros in tax cuts for households.

It includes €5 billion in tax cuts for some 12 million households already promised by President Emmanuel Macron, the result of a “great national debate” he held to try to address the ongoing protests.

French police swamped central Toulouse with tear gas yesterday to suppress anti-Macron protests. Similar scenes in Hong Kong are given huge coverage by the BBC, but then the Gilets Jaunes are against corrupt Western elites rather than Chinese ones.pic.twitter.com/vonsuCCxFI

Macron, who swept to the presidency in 2017 with a pledge to get the country back on a solid financial footing, was caught short by the “yellow vest” movement which accused the former investment banker of ignoring the day-to-day struggles of many French.

Demonstrations have been banned on the Champs-Elysees after protesters clashed with police on the famous Paris avenue on December 8 last year, in the early days of the yellow vest protests.

On that weekend, police detained 900 people: the most since the anti-government protests began.