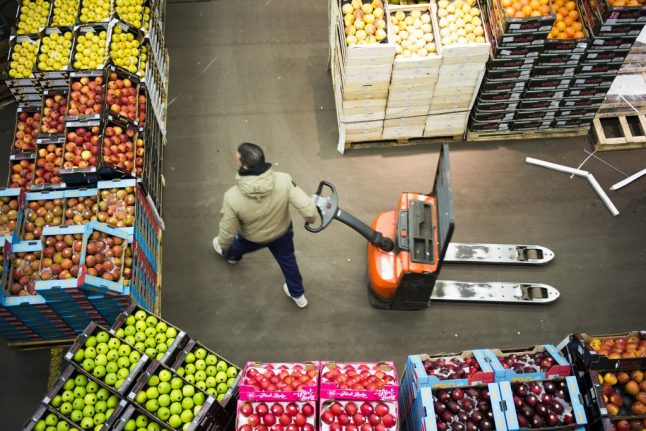 White smoke billows from a chimney at a sugar beet factory in northern France, where a tanker truck is filling up on the region's “white gold”.

As the sugar beet harvesting season enters full swing, the Lillers plant of the world's third-biggest sugar producer Tereos is a hive of activity, with trucks bearing consignments of sugar departing every hour for markets around Europe.

Many are headed to Britain through the nearby port of Calais, Tereos' fifth biggest market, where it supplies sugar to United Biscuits as well as the Whitworths baking sugar brand.

But that custom, which is crucial for Tereos' 14 French plants, could turn sour if, as remains a danger, Britain leaves the EU on October 31 without a divorce deal, prompting the return of a hard border.

Tereos says that the cost of its sugar to British clients could jump by 50 percent. “Today, we're looking at (import tariffs of) 150 euros per tonne of sugar. Given that a tonne of sugar is worth 400 euros, when you factor in the extra cost of customs and logistics, we could reach additional costs of 200 euros, or 50 percent,” Paul Jacquelin, Tereos' business transformation manager, told AFP.

“It's very worrisome for our British clients who will suffer big (price) increases.”

The cooperative, which groups 12,000 French beet growers, also fears its shipments being held up by tailbacks caused by the return of border controls in Calais.

This week, French customs staged their third dress rehearsal for a no-deal Brexit in as many weeks, subjecting a selection of trucks travelling between Calais and the English port of Dover to simulated export and import checks.

“I think we're ready,” Jean-Michel Thillier, deputy director of the French customs service, told AFP, pointing to new “smart border” technology aimed at easing traffic across the world's busiest shipping route in the event of a return of a hard border.

But a delay of even a day or two in Calais could jeopardise some of Tereos' business, causing its glucose syrups to solidify and British biscuit-makers working on a just-in-time production basis to run out of sugar.

“We're still hoping that a deal (between the EU and Britain will be found), or that the UK will unilaterally reduce all its import tariffs to zero,” Jacquelin said.

Concern over Brexit is also palpable at Rungis Market south of Paris, the world's biggest wholesale market for fresh produce.

Marie Rivenez, head of GRG, one of France's biggest meat wholesalers, which imports 600 lambs each day from Britain, told AFP she had received “absolutely no information” about what kind of sanitary checks, if any, might apply after Brexit. She is equally concerned about the import tariffs that would apply to lamb in the event of no-deal Brexit and which she estimated at “nearly 50 percent of the price”.

“If that's the case we will no longer be able to source our lamb in Britain,” she said, warning that the relationships built up by GRG with British suppliers since the 1970s could be at risk.

“It's very, very complicated,” she said.

Over the past year the French government has been on a drive to get them Brexit-ready, with the help of the Medef employers federation and regional chambers of commerce.

But concerns remain over the level of preparedness among small and medium-sized businesses with little or no experience of trading with countries outside the EU.

Tereos manager Jacquelin assures that the company, which has increased the number of factories certified for exporting to non-EU members from two to 10 and put in place a system for keeping its syrups liquid for longer while in transit, is ready.

At Rungis Market, GRG's Rivenez says she is waiting to see whether Brexit will again be delayed, or an eleventh-hour divorce deal struck with Brussels, before changing her lamb suppliers and prices.

“We don't want to cause panic among our clients for nothing,” she said.