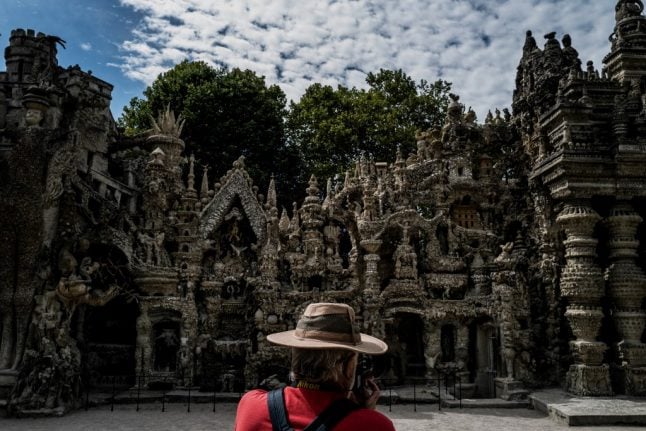 But this is not India or Cambodia but southeast France and this extraordinary edifice was not dreamt up by an ancient mystic or Salvador Dali but over a century ago by a humble French provincial postman.

The “Ideal Palace” was created by Ferdinand Cheval, known as Facteur Cheval (Postman Cheval), in his home town of Hauterives south of the city of Lyon.

Cheval created the monument by hand, picking up stones especially oddly shaped ones on his postal rounds and elsewhere over a period of 33 years from 1879 to 1912.

And after finally finishing his life's work, he set about designing and building his own tomb next door.

In recent years, the site has attracted tens of thousands of visitors a year as one of the most extraordinary examples of naive art architecture anywhere in the world, a fact that would no doubt delight its creator, who died aged 88 in 1924. But its survival is in no small part due to the novelist Andre Malraux, who exactly half a century ago won protection for the Ideal Palace as a historical monument while serving as culture minister.

Malraux defied experts at the time, who denounced the edifice as hideous, to bestow the protection on the Ideal Palace on September 23, 1969.

“The tenacity of Malraux saved the palace from ruin,” said Frederic Legros, the palace's current director.

Walking round the edifice, an extraordinary melange of influences from east and west, Legros pointed out inscriptions in the palace by Cheval to guide visitors.

“'By creating this rock, I wanted to prove what the will can do',” one inscription reads.

“It is true that there is a dimension to wanting to overcome your social condition,” said Legros.

“It is this idea that this man, who was very poor, built himself a palace, the perfect palace,” he added.

After finishing the Ideal Palace — whose name simply comes from a poem left by a young visitor from Grenoble describing a visit — Cheval embarked on building his own mausoleum.

He had originally wanted to be buried in the palace but both the Church and local state authorities made clear this would not be acceptable.

Cheval spent the next seven years sculpting his own tomb, another wildly ornate structure, where he is buried. Legros said it was “his masterpiece”. The Ideal Palace contains representations of a mosque, a Hindu temple and a mediaeval castle.

“It is true that it is a total mixture without any superiority of one culture over another. Everything is mixed and everything is made equal,” said Legros.

Cheval, who was born in 1836, began the building when he tripped over a stone with an unusual form.

The first stone retains a prominent position to this day.

“He discovers these rather exceptional shapes and marvels at what nature can do and this encourages him to throw himself into the Ideal Palace,” said Legros. Cheval, who proudly described himself as a peasant and the son of a peasant, had of course never seen an elephant or a leopard in real life, still less travelled to see oriental temples.

A self-taught visionary, Cheval drew his inspiration from postcards or illustrated magazines.

“He has never seen them, but he reproduces them anyway in his palace, sometimes with a certain amount of reality because it's the interpretation of an image,” said Legros.

The fame of the monument grew even during Cheval's lifetime.

Pablo Picasso visited the palace with fellow artist Dora Maar, with whom he had a years-long relationship, and his friend the poet Paul Eluard.

According to Legros, last year's visitor numbers of 180,000 was already reached on July 31 this year.