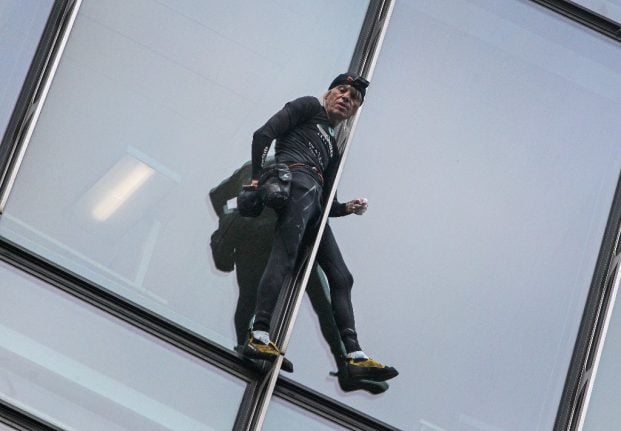 Robert, 57, reached the top of 154-metre (500 feet), 42-floor building in just half an hour — without permission nor safety equipment – causing passersby to stop, stare and take photos.

Back on the ground, police moved into to arrest Robert who has chalked up a series of similar stunts across the globe since 1994, among them the world's tallest building, the Burj Khalifa in Dubai, and the Eiffel Tower in Paris. In August, he climbed a Hong Kong skyscraper and unfolded a “peace” banner as massive and sometimes violent pro-democracy protests rocked the city.

On Saturday he gave no reason for his Skyper climb.

Can this day get any weirder? Alain Robert climbing >40F of GT Tower. pic.twitter.com/uEmmO1eQlB

“I have pretty much dedicated my whole life to climb mountains, to climb cliffs, and now to climb buildings — but always 'free soloing', meaning I'm not using safety devices.”

The maverick climber has scaled more than 100 structures without ropes or other safety equipment, setting a record for “most buildings climbed unassisted,” according to Guinness World Records.