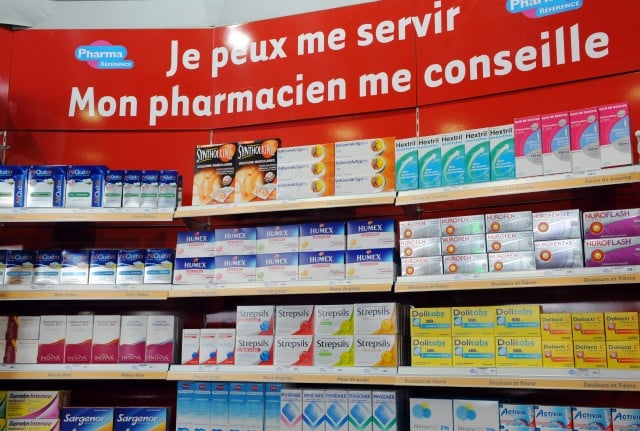 In 2017 alone, France's drug consumption neared €38 billion, and studies from earlier in the decade showed that 90 percent of doctor's appointments in France result in some kind of medication being prescribed.

But why do French people take so much medication?

It's probably not because they are sicker than anyone else – life expectancy in France is 82.3, against the UK life expectancy of 81 and the EU average of 78.5, which seems to argue against a nation of chronic invalids.

This over-prescribing tendency can partially be explained by the looming presence of French pharmaceutical companies in practitioners' offices. Promotion visits by these companies aim to persuade doctors to prescribe some of their drugs.

On the other hand, practitioners also sometimes feel compelled to deliver prescriptions to reassure their patients. Studies have shown than more than 20 percent of French patients have pressured their doctor to prescribe drugs such as painkillers and anti-inflammatories. We asked some French people if they believed the Sécurité Sociale promoted the high consumption of medication.

Yohan, a factory worker, was unequivocal. ''Of course the French Social Security is an undeniable privilege. But I believe some people use and abuse of this privilege. If it did not exist, I sincerely think we would think twice before taking or asking for a prescription drug.''

Tom, a 29-year-old waiter, was not as categorical. He said: ''You just have to look at the amount of non-reimbursed drugs we are all taking to understand the Sécurité Sociale is not the issue here. I think it is deeper than this.''

Of course not all medication requires a prescription. Many remedies are sold over the counter at pharmacies and even smaller French towns generally have at least one pharmacy if not more, recognisable by their distinctive green crosses.

French people have an habit of using them for even very minor ailments.

However, these medications are far from being harmless: back in 2017, a 22 year-old woman died after taking too much paracetamol for her ailments. Emergency services had failed to diagnose her over the phone.

Moreover, it is almost French tradition to save unused prescription drugs in their home medicine cabinet, so they can avoid a physician consultation the next time over. Preciously-stored drugs most of the time include codeine-based painkillers and antibiotics.

According to the President of the Fédération des Médecins de France (the French doctors' union), Dr Jean-Paul Hamon, French people being able to store prescription drugs like canned goods does not come from practitioners over-prescribing.

''The thing is, people tend not to follow their prescription to the letter. When taking antibiotics for example, they will stop them five days in the treatment because they are starting to feel better.

“But their physician gave them antibiotics for seven or ten days, so obviously they are going to have unused medicine left,'' he told The Local.

But is France's consumption going up or down?

Well, there hasn't been much recent data released, but according to LEEM, a pharmaceutical union, drug consumption has been on the decline for a few years now.

One factor could be several major scandals over the last decade, which have seen French people grow more wary of pharmaceutical companies.

In 2009, the Mediator case was exposed: the drug, prescribed to more than 5 million diabetic people across Europe, is taken off the market. Recognised as a toxic substance close to amphetamines, French authorities acknowledged more than 500 people died because of the drug in the country and a court case is currently ongoing.

Only a year later, the Dépakine scandal came out. It is estimated than more than 4,000 babies born between 1967 and 2016 suffered from congenital malformation because of anti-seizure drugs prescribed to women while they were pregnant.

France is also becoming more aware by the day of the dangers of antibiotic resistance.

Since the early 2000s, the country's public authorities campaign every winter on how to properly use antibiotics, bombarding French people with their now cult slogan Les antibiotiques, c'est pas automatique – Antibiotics are not automatic.

The campaign is aimed at making both doctors and patients aware of how risky over reliance on antibiotics is. According to the Agence Nationale de Sécurite du Médicament – National Agency for Medication Safety, French consumption dropped by more than 11 percent since the beginning of the campaign.

And there might b a further fall in consumption when the costs of homeopathic drugs stop being reimbursed by the state – a change that is due to come in on January 1st 2020.

Homeopathy is very popular in France and most pharmacies stock a wide range of herbal remedies, while doctors also frequently prescribe them. However the French government has announced that, due to a lack of data proving the efficiency of such remedies, it will no longer be bearing the cost.

Whether that discourages French patients remains to be seen. Elisabeth, a parapharmacie salesperson said: ''I've been working here for seven years now. I really notice clients wanting to switch to more natural remedies, like our grandmothers used to. Some of them even come to us before going to their physician or regular pharmacy.''

parapharmacie – like a pharmacy, but it only sells over the counter products, not prescription medication. They still have a qualified pharmacist on the premises though

For a full list of essential French vocab for a trip to the doctor in France, click here.