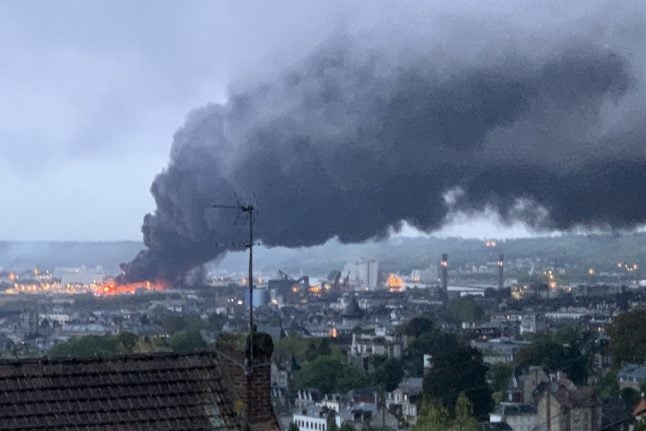 The blaze broke out in the early hours of Thursday at the Lubrizol plant in Rouen – a large factory that is classified as Seveso, or high risk, because of the nature of the chemicals it produces.

“Let's not panic about this situation, but we need to be very careful,” Interior Minister Christophe Castaner told RTL radio, adding that “there is nothing to make us believe there is a risk from the smoke.”

Castaner later said that it could take days before the fire is extinguished.

“The fight they will have to wage to get the situation fully under control will take several days, maybe even weeks,” Interior Minister Christophe Castaner said after arriving at the site.

But later on Thursday morning the government's top official for the region said the fire at the chemical plant poses a pollution risk for the nearby Seine river.

“We're still fighting the blaze, with the risk that pollution could spill into the Seine if retention ponds overflow,” Pierre-Andre Durand told journalists. Warning sirens were sounded in Rouen and nearby Petit-Quevilly and residents have been warned to stay indoors and limit their movements as far as possible today, as a precaution.

The préfet of the Seine-Maritime region told French media on Thursday morning that there is “no acute toxicity in the main molecules” of the smoke that is being released, according to initial analyses.

However he added that “as a precautionary measure” residents of Rouen and 11 surrounding areas should “limit their movements to what is strictly necessary” on Thursday.

There were around 200 firefighters battling the blaze on Thursday morning, and plumes of smoke could be seen from several kilometres away.

“The smoke is really striking and wherever you are in Rouen you can see it,” Marina Andre, a 25-year-old who works in a bar near the factory, told AFP.

“You can smell fuel, not really a burned smell, it's very distinctive,” she said, adding that people were still going to work and even cycling near the site of the blaze on the bank of the Seine river.

The fire broke out at around 2.50am on Thursday, followed shortly afterwards by a series of explosions which woke many local residents.

Good morning to everyone except lubrizol who decided to catch fire and freak me tf out at 5am #Rouen pic.twitter.com/KD5T2O0vmc

A spokesman for the factory said that “the fire started in a storage facility for packaged products such as lubricant additives”.

A 500m perimeter has now been set up around the site.

The factory on the edge of the river Seine in Rouen belongs to US multinational Lubrizol, which is owned by billionaire American investor Warren Buffett.

In January 2013, it was responsible for a giant leak of the gas mercaptan, which smells like cabbage or rotten eggs.

It blew all the way to Paris and across the Channel into southern England where residents complained about the smell.

In 2015, 2,000 litres of mineral oil, which is used in lubricants, leaked into the local sewer system in Rouen, which is famed for its cathedral.