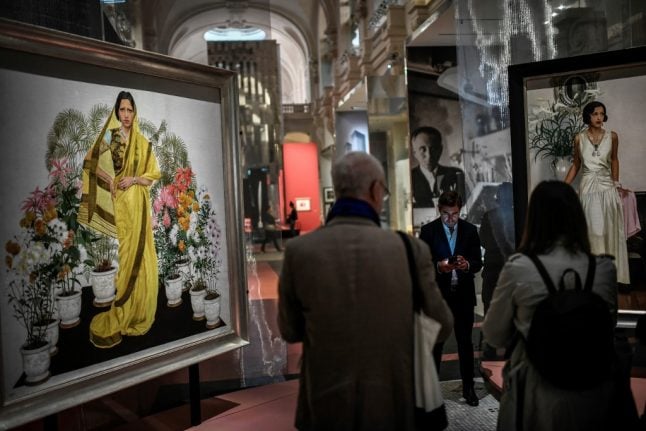 The exhibition is now open at the Museum of Decorative Arts in Paris. All photos: AFP

The extraordinary lives and impeccable taste of the Maharajah of Indore and his maharani, Sanyogita Devi, are celebrated in a spectacular new exhibition at the Museum of Decorative Arts in Paris.

With the clouds of World War II darkening over Europe, the pair created a gem of an avant-garde palace on the Malwa Plateau in the heart of India. An oasis of understated but dazzling modernist luxury, it was furnished with pieces by Eileen Gray, Le Corbusier and Pierre Jeanneret among others, with art by Brancusi.

The first building in the subcontinent to have air conditioning, it also had a ballroom where the couple could do the foxtrot to the jazz-loving maharajah's collection of 100,000 records.

The aesthete prince commissioned the young German architect Eckart Muthesius to create his dream of the future.

Together the two men combed the salesrooms and artist studios of Paris and Berlin with art advisor Henri-Pierre Roche – author of the novel Jules and Jim – to find the works to fill it.

Muthesius was also asked to kit out the 25-year-old maharajah's sleek new royal train, as well as a barge that was a “vertible floating modernist palace” and do the interiors of his private plane.

He designed, too, a hunting caravan so the prince – who had come to the throne at 17 – could stalk tigers in style. Despite being bound together in an arranged marriage when she was 10 and he only a few years older, and having one foot in the Raj and age-old Indian princely traditions, the pair were a thoroughly modern couple, said the chief curator Olivier Gabet.

The ever-elegant maharajah was a “veritable Rudolph Valentino”, said Gabet, and few could fail to be charmed by his bright young wife, who shared his interests.

“She was involved in all their projects and was treated as an equal by her husband. In fact, they were quite an exceptional couple,” he said.

Man Ray, their guest on the French Riviera, thought the same. He was very taken with the maharani, whom he described as an “exquisite girl in her teens”.

“Dressed in the French style, she wore a ring with a huge emerald that the Maharaja had bought her that morning,” he later wrote.

Clearly deeply in love, the couple had “a magnetic aura”.

In fact they charmed everyone wherever they went, whether filmmaker Cecil B. DeMille and actor Gary Cooper in Hollywood, or old world royals like themselves.

Vogue described the maharajah as like a “character from a Visconti film, the last member of a carefree aristocracy, living its final hours in the lap of idle luxury.”

And indeed, the couple did not have long to enjoy their idyll in their modernist home, the Manik Bagh, or “garden of rubies”.

The maharani died at the age of 22 from appendicitis, leaving behind their toddler daughter, Usha, the present maharani.

The maharajah's artistic adventures pretty much ended with her death, said Gabet, “which shows just what an influence she had.” Despite being educated in England, Yeshwant Rao Holkar II –  in the shortened version of the maharajah's full title – turned away from the well-trodden tweedy anglophile tastes of his princely peers.

His Paris-based son Richard Holkar believes the maharajah's cosmopolitanism may have been a reaction to his father and his grandfather being forced to abdicate by the imperial overlords.

Gabet agrees, believing that it “may have been a way of asserting” his independence.

After his wife's death, the maharajah went on to marry again twice but his inner life remains mysterious.

He died in 1961 as he was planning to write his autobiography, having burned all his private papers.

“They are both quite mysterious actually,” said Gabet.

“It was a time where people didn't bare their souls in the press,” and they came from a class where “there was a great sense of holding back, of reserve and of discretion.

“It's the mystery in some ways which makes them so mythic,” he added. But if their fame has been somewhat forgotten, even in India, where maharajahs were stripped of the last of their powers in 1971, the couple's legendary connoisseurship has not.

Collectors like fashion moguls Yves Saint Laurent and Pierre Berge, and the Qatari prince Sheikh Saud bin Mohammed Al-Thani, snapped up much of their furniture and carpets in a legendary auction in Monaco in 1980.

Their modernist “garden of rubies” has been swallowed up by the expanding city of Indore, now in Madhya Pradesh.

The once stately salons of the Manik Bagh have long since been subdivided into offices for the local excise department.