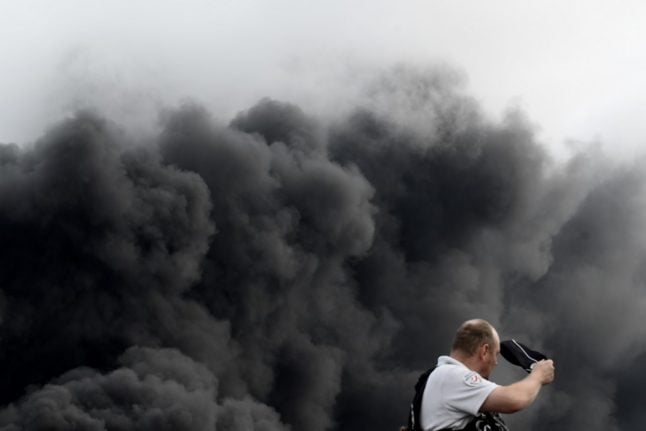 The residents of Rouen were awakened in the early hours of Thursday by a several massive explosions. The explosions came from the nearby Lubrizol factory, where fire had broken out at 2.50am.

The fire started in a storage facility for packaged products such as lubricant additives, according to a spokesman for the company. The series of large explosions, described as “very shocking” by local residents, were caused by oil that had leaked due to the fire.

Around 150 firefighters were quickly at the scene and began work to contain the blaze, but as dawn broke on Thursday the massive plume of smoke from the factory could be seen from several kilometres away.

Is there a risk to local people?

The factory is designed a Seveso site, which means there is a high risk because of the toxic nature of the chemicals it produces. Owned by an American parent company, the Rouen factory produces additives for oils and industrial lubricants.

Although the enormous plume of thick black smoke looks highly dramatic, local officials say that there is “no acute toxicity in the main molecules” at least according to initial analysis.

However the Préfecture of Seine-Maritime has put in place a series of precautionary measures. A 500m exclusion zone has been put in place around the factory.

Residents outside the zone have not been evacuated, but have been advised to stay indoors and “limit their movements as much as possible”. Clouds of thick black smoke can seen from several kilometres away. Photo: AFP

Local officials say there is also a risk that the River Seine – which runs through Rouen – could be polluted if retention ponds overflow.

Despite this, French authorities say there is no need to panic.

Interior Minister Christope Castaner told French radio station RTL: “Let's not panic about this situation, but we need to be very careful. There is nothing to make us believe there is a risk from the smoke.”

What is a Seveso site?

There are 1,300 sites in France, and they are factories or manufacturing plants that have been identified as risky by authorities because of their “association with certain hazardous industrial activities”.

It's named after the town of Seveso in Italy, which was the site of a devastating industrial accident in 1976 which saw high levels of the toxic chemical dioxin released into the air. The disaster prompted a Europe-wide approach to identifying and classifying high-risk sites.

You can click here to get an interactive version of the map of Seveso sites in France.

Around 150 firefighters were still at the scene by the late morning and said they were working to protect other areas of the factory to prevent more chemicals catching fire or exploding.

Shortly before midday, a fire service spokesman said that the blaze was “contained but not out”.

They say there are dangerous products on the site and they need to prevent the risk of further contamination.

The 500m exclusion zone is likely to remain in place for some time. There have been no reports of injuries.

Local authorities have opened a public information line for anyone concerned about the blaze. Call 02 32 76 55 66 for more details.