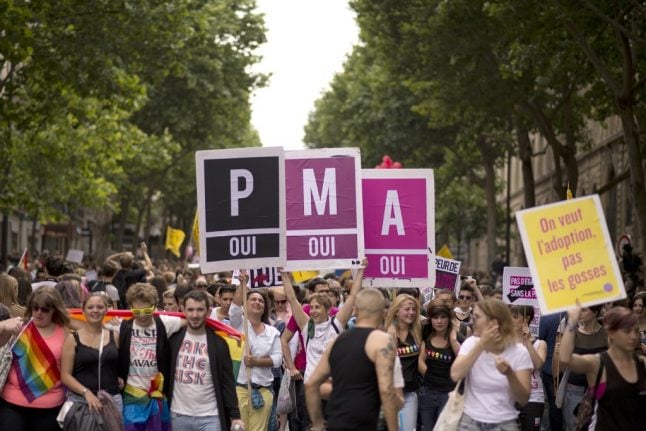 The majority of French people are in favour of extending IVF treatments. Photo: AFP

Under current French law, only heterosexual couples have the right to use medically assisted procreation methods such as in vitro fertilisation, commonly known as IVF.

Lesbians and single women who want to have children often travel abroad to fertility clinics for treatment, a situation they say is discriminatory. On Tuesday, parliament will start debating a bill that would give all women access to treatments such as IVF and artificial insemination in the face of opposition from conservative political groups and senior Catholic figures.

It is the first major social reform proposed by Macron's centrist government, and would bring France in line with several EU countries such as Belgium, Britain, Spain and Sweden that help lesbian couples and single women get pregnant.

While campaigning for president in 2017 Macron had said he was “favourable” to extending fertility treatment to lesbian and single women — but did not promise any action.

In the past two years, he repeatedly delayed introducing the legislation, mindful of the fierce opposition spurred by gay marriage law that was introduced under socialist president Francois Hollande in 2013

The measure had already been approved without major incident in other more Catholic countries around the EU.

The draft legislation would also allow children conceived with donor sperm to learn the donor's identity when they turn 18, ending the anonymity that donors in France have been guaranteed until now.

And it allows women in their mid-thirties to freeze their eggs – a procedure currently available only to women undergoing treatment for conditions that could impact their fertility, such as radiation therapy or chemotherapy for cancer.

Speaking to lawmakers from his Republic on the Move (LREM) party last week, Macron described the draft law as fraught with risk for the government.

But he said he was confident the stage had been set for the law after months of public consultations and a thumbs-up from France's national bioethics committee.

Yet plans for street protests are already afoot.

Around 20 conservative groups have called for a rally in Paris on October 6th against changes they say will “deprive children of their father”.

Last week, the head of the French conference of Catholic bishops also weighed in on the issue.

Eric de Moulins-Beaufort argued it was the “duty” of concerned citizens to demonstrate against the bill. A demonstration in Paris in 2016 against same sex marriage. Photo: AFP

A step towards surrogacy?

Xavier Breton, a Republicans MP, argued that in the name of equality between heterosexual and homosexual couples the government was “denying the difference” between men and women.

Other critics of the draft law say the measure could take France a step closer to legalising surrogacy, a practice whereby a woman carries a child for a couple, in some cases two gay men.

The government has denied any plans to lift the ban on surrogacy and has also hit back at the charges of being anti-father, noting that a quarter of all French families are already headed by a single parent, nearly always the mother.

Leftwing parties have all backed the bill, which analysts say could help the Macron recover some lost support on the left after he pushed through a series of pro-business tax cuts and other measures in the first half of his five-year mandate.

Health Minister Agnes Buzyn has said she is preparing for a lengthy battle in the lower house National Assembly and the Republicans-controlled Senate.

“The idea is that the bill be adopted before the summer (of 2020),” she said Sunday.

The legislation could reduce the flow of single women and lesbian couples to fertility clinics in Spain or Belgium, where they typically pay several thousand euros for a single round of IVF.

In the future, those couples would be able to receive the same treatment at home, paid for by the French health service.

The government has estimated that the bill would benefit around 2,000 women annually.