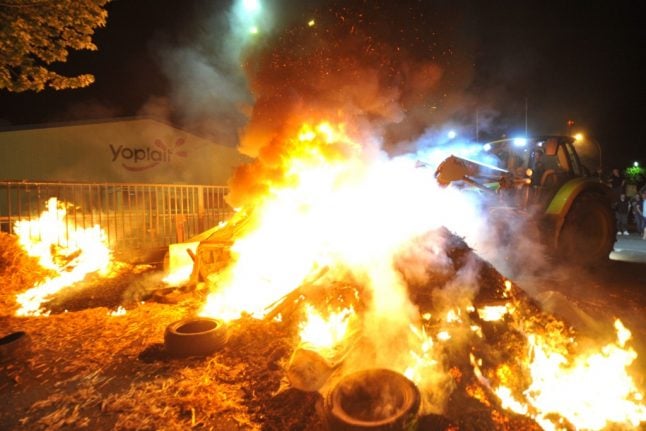 Photo: AFP: A burning barricade as French farmers block access to the dairy cooperative Sodiaal during a protest against the plunging prices of milk on July 12, 2016 in Le Mans, western France.

The “fires of anger” began to burn at the end of the day on Monday, September 23rd. Responding to the call of the National Federation of Farmers' Unions (FNSEA) and Young Farmers (JA), a few hundred farmers burned pallets, straw bales and stumps to express the agricultural world's “unease”.

Why is it happening?

In a word, pesticides. Or rather the drive to remove them from inhabited areas. The trigger for this action was the recent project to set up non-treatment areas (NTAs) to protect populations from the potential dangers of pesticides.

“This lit the fuse,” said Damien Greffin, president of the FNSEA Ile-de-France. “The agricultural world is stigmatised on a daily basis.”

“We called them the fires of anger, but also the fires of despair, to make people realise the prevailing unease in the countryside, and the relentlessness that we endure on a daily basis,” said Amandine Muret-Beguin, cereal producer and secretary general of the IDF-Ouest JAs.

“The NTAs were the last straw. We are already being attacked on a daily basis for our practices, when the government admits that we have the most sustainable agriculture in the world, so it makes no sense,” said Muret-Beguin.

Where did it take place?

In Ile-de-France, fires were lit in half a dozen places, including two in Val-d'Oise, three in Yvelines, and one in Essonne, according to Muret-Beguin.

According to her, at each site, around 20 members of the group maintained the fires throughout the night.

In Essonne, Greffin claimed about 40 people had gathered in the commune of Etampes with ten tractors and they set pallets on fire.

Similar operations were organised in other regions.

In the Marne, two demonstrations took place in Witry-les-Reims, on the road leading to Charleville-Mézières, with about 70 people according to the FNSEA.

In Haute-Garonne, small groups planned to start fires in fields near around Toulouse, according to Xavier Dayde, Deputy Secretary General of the FNSEA 31.

In the Pas-de-Calais, in Coquelles, near the entrance to the Channel Tunnel, about 70 local farmers lit fires in the field and positioned about 20 tractors around a roundabout, without blocking access.

In Calais, a similar demonstration, without blockages or clashes, took place at the roundabout near the city's hospital.