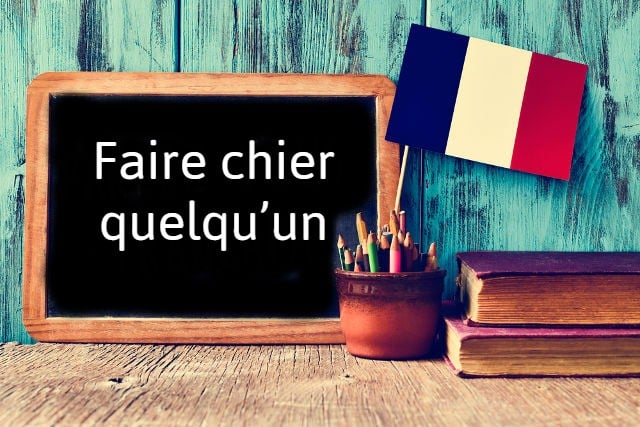 Why do I need to know faire chier quelqu’un?

French speakers used this expression a lot, especially when annoyed or angry, although it must be stressed they use it in a very informal setting. But you will hear it a lot if you hang around with the younger generations.

You might want to learn this expression in order to find out whether a friend or a colleague is cross at you for something you did or said and avoid making an uncomfortable situation even worse.

Faire chier quelqu’un is an expression that means to annoy or strongly exasperate a person with something you have said or done.

It’s considered rather vulgar so be careful with whom you use it and it roughly translates as you're really pissing me off, or you're really bugging me.

So if you can't stand your boyfriend's irritating personal habits any longer, you could say tu me fais chier – you're really pissing me off!

As with many French phrases, it can be made stronger with the addition of a good putain.

So Tu me fais chier putain! would translate as You’re fucking pissing me off!

That's obviously a fairly robust phrase, so should be used with extreme caution.

If you want a milder and less offensive way to let people know that what they're doing is irritating, you could use c'est agaçant or a slightly different version ca m'agace or tu m'agaces!.

There's also tu m'énerves (ca m'énerve!) as a way of saying “you're annoying me” or “that's annoying me”.

Slightly more informal ways to tell people they are bothering you are tu me gonfle – literally, you are blowing me up or tu me saoules, which translates literally as you're making me drunk.

tFor more words and phrases to spice up your conversation, check out our French Word of the Day section.