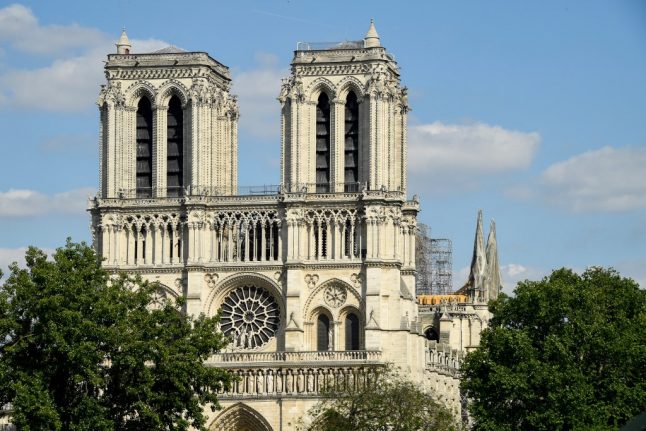 It is the first time women have appeared on charges of jihadist terrorism in an assize court, which handles the most serious crimes in France.

Four of the women risk up to life in prison and the fifth a 30-year sentence for the September 2016 plot at the medieval cathedral, which in April 2019 was ravaged by an accidental fire.

A sixth woman is also being tried for not alerting authorities to the planned attack.

“Only the wrong choice of fuel… caused this attempt to fail,” investigating magistrates said. The alleged terror plot pre-dated the devastating fire in April 2019, in which the cathedral lost its spire. Photo: AFP

The women were arrested after an empty Peugeot 607 sedan was found parked near the bustling square outside Notre-Dame, where a bar employee noticed a gas cylinder in the back seat and alerted the police.

That cylinder was found to be empty but five full cylinders were discovered in the car boot.

Prosecutors say that on the night of September 3-4, Ines Madani and Ornella Gilligmann parked the car after sending a video claiming responsibility for the planned attack to Rachid Kassim, a notorious French member of the Islamic State group.

Kassim is also suspected of directing the brutal murder of a police couple outside their home in June 2016, a killing that was broadcast live on Facebook, and another in which an elderly priest's throat was cut.

Kassim is believed to have been killed in a coalition air strike near the Iraqi city of Mosul in February 2017.

For Jean-Charles Brisard of the Centre for the Analysis of Terrorism, the foiled plot marked “a tipping point: it's the moment when people realised the role of women” in the jihadist attacks on French soil.

Madani, now 22, and Gilligmann, a 32-year-old mother of three, had doused the car with diesel fuel and tried to set it alight with a cigarette, but failed because the fuel is not easily flammable.

“Only the wrong choice of fuel… caused this attempt to fail,” investigating magistrates said.

Gilligmann was arrested on September 6 in southern France while trying to flee, and Madani holed up in an apartment in the Paris suburb of Essonne that belonged to Amel Sakaou, who is also on trial.

She was guided by Samia Chalel, who served as an intermediary between Madani and Kassim.

They were soon joined by Sarah Hervouet, who was also communicating with Kassim via the encrypted Telegram messaging app.

They were arrested a few days later after trying to leave the apartment armed with kitchen knives. Hervouet stabbed one officer in the shoulder, while Madani was shot in the leg.

“It is very daunting to be judged by a Court of Assize but she is quite confident because she believes in the possibility of a fair and not excessive trial.”

Marinacce rejected allegations her client orchestrated the plot, which she said was a “collective emulation”.

“The real people in charge are the men in Syria who were pulling the strings,” he said.

Madani was jailed for eight years last April for trying to recruit jihadist fighters ahead of the plot to fight in Syria or carry out attacks in France and Belgium.

She used pseudonyms and modified her voice to appear as a man – prosecutors say it was only after the failed attack that Gilligmann learned that a man she had fallen in love with on the internet was in fact Madani.

Guillaume Denoix de Saint-Marc, spokesman and founder of the French Association of Victims of Terrorism, which is a civil party in the trial, said it showed that women could also be radicalised.

“We really have to follow this very closely to better understand them, to judge them, to obtain justice, because they really wanted to kill,” he said.

The trial is expected to last until October 11.