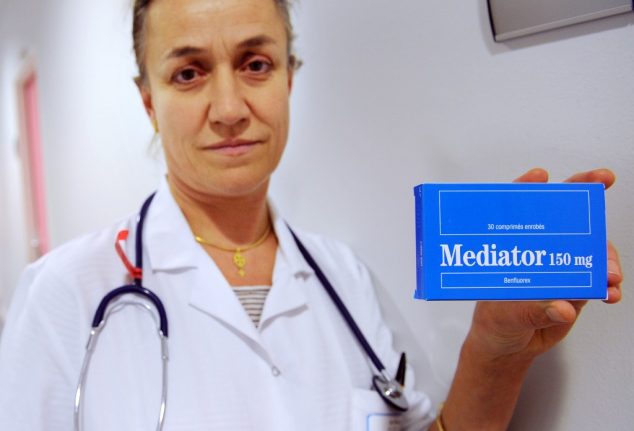 At least 500 people are thought to have died of heart valve problems in France after taking the drug, Mediator, in a major health scandal that became the subject of a 2016 French movie called “150 Milligrams”.

Legal experts have concluded the drug may cause as many as 2,100 deaths in the long term.

The criminal trial, with 12 individuals in the dock, will focus on 91 victims, four of them deceased, for whom lawyers believe a link can be shown between their illness and Mediator.

The medicine was on the market for 33 years, and used by about five million people.

Though initially intended for overweight people with diabetes, it was widely prescribed to healthy individuals as an appetite suppressant.

Safety alerts were first flagged in the mid-1990s, but the drug was only banned in France in 2009 — long after being outlawed in the United States, Spain and Italy.

Victims “want to understand how this medicine could have been left on the market for so long,” said Charles Joseph-Oudin, who will represent about 250 complainants in the trial expected to run for six months in the Paris criminal court.

Drug manufacturer Servier and nine subsidiaries are charged with fraud for allegedly concealing Mediator's risks, while the ANSM drug watchdog is being pursued for negligence and allegedly dragging its feet in suspending the drug. At the end of the trial, both risk a fine or an order to compensate victims.

“Servier knew that it was selling poison,” said 71-year-old Joy Ercole, who took Mediator for six months ten years ago, and said she suffered heart damage as a result.

“The unlucky ones, like me, are condemned to a slow death. My life is ruined.”

Francois de Castro, a lawyer for Servier, said the company was “keen to come and explain that they did not identify the risk before 2009.”

Pulmonologist Irene Frachon had alerted French health authorities of heart problems among patients who had taken the drug. She published a book in 2010, which became the basis for a documentary movie.

In 2015, a civil court found Servier negligent for having left “defective” medicine on the market.

It ruled that in 2003 and 2006, when the medicine was prescribed to two claimants, “the state of scientific knowledge meant the risks of pulmonary hypertension” and heart valve damage “could not be ignored”.

The ANSM, then known as Afssaps, in 2010 linked at least 500 deaths to Mediator.

Victims have submitted nearly 10,500 claims for compensation from Servier, and many have accepted payment in return for not taking part in criminal proceedings.

Servier's website states it has made offers of compensation to more than 3,700 sickened people for a total amount of 164.4 million euros ($182 million), of which 131.8 million euros have been paid out.

The amounts range from a few thousand euros per person to a million euros in one case.

About 100 witnesses are expected to take the stand, including Frachon, who told AFP ahead of the trial it was time for justice to be served.

“We cannot live in a society where white collar crime goes unpunished,” she said.

The trial will happen in the absence of a key protagonist: company founder Jacques Servier who died aged 92 in 2014.

The 12 individuals on trial include Servier's former number two Jean-Philippe Seta, doctors who were members of Afssaps commissions but were also paid as consultants for pharma companies, and former senator Marie-Therese Hermange who is accused of producing a report that was favourable to Servier.

Thee include 36 baby deaths in the 1970s linked to a contaminated talcum powder, HIV-contaminated blood given to haemophiliacs in the 1980s, and the recent discovery that a popular brand of breast implants contained a cheap, industrial-grade — not medical-grade — silicone gel.