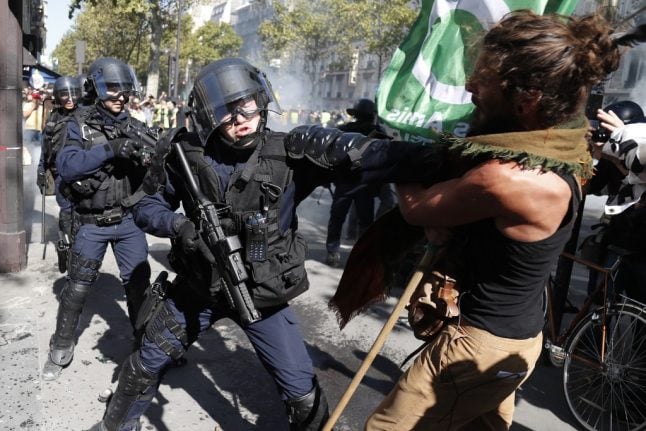 Several hundred protesters were in the streets of the French capital around 11am (0900 GMT) on Saturday.

By then police had arrested 39 of them, police headquarters said, adding that some protesters had been found to carry hammers or petrol canisters.

By 1.00 pm (11 GMT) police had arrested 106 demonstrators, police headquarters said, adding that some had been found to carry hammers or petrol canisters.

“We are being treated like criminals,” said a woman, who identifed herself as Brigitte. The authorities had banned demonstrations in some areas of the city, including tourism hotspot Champs-Elysees, but some protesters violated the ban, leading to a tense standoff with police who used teargas and batons to scatter them.

Really kicking off along the Champs-Elysees, tourists and protestors caught up with French Police and their chemical weaponry.

There were also fears that the most radical demonstrators could try to infiltrate a march against climate change in the French capital, worries that were later confirmed to be justifiable by the appearance of group of violent “black boc” thugs in the otherwise peaceful march.

Greenpeace and Youth For Climate organisers have since asked participants to stop marching in order to disenfranchise themselves from the violence. The yellow vest movement erupted 10 months ago and blindsided President Emmanuel Macron, whom protesters accused of being out of touch with the needs of ordinary French people.

“What are we doing? We are assembling just to say that we can't make ends meet. (The protest) is not only against the president, it's against the system,” said a woman protestor who did not give her name.

The weekly demonstrations — this Saturday being the 45th — prompted Macron to loosen the state's purse strings to the tune of nearly €17 billion ($18.8 billion) in wage boosts and tax cuts for low earners, but tapered off over the summer.

However, it remains to be seen whether the movement will regain the momentum of the winter and early spring, when the protests often descended into violent clashes with security forces, especially in Paris. Paris police have sent out a tweet asking peaceful protesters to exercise caution due to the presence of black bocs in the crowds.

Macron on Friday called for “calm”, saying that while “it's good that people express themselves”, they should not disrupt a climate protest and cultural events also due to go ahead on Saturday. The number of police deployed for Saturday's rallies are on a par with the peak of the yellow vest protests in December and March.

Key yellow-vest figure Jerome Rodrigues has billed Saturday's protest as “a revelatory demonstration”, claiming “many people are going to come to Paris”.

But officials have again outlawed protests on the Champs-Elysees and other areas in the heart of the capital, where previously protesters had ransacked and set fire to luxury shops and restaurants.

Some demonstrators in January even used a forklift truck to break down the doors of a government ministry.

The police have also been criticised for being heavy-handed in clashes with hardcore anti-capitalist “black bloc” groups blamed for much of the violence that has accompanied the demonstrations. Saturday coincides with the annual European Heritage Days weekend, when public and private buildings normally off-limits to the public are open to visitors.

Macron said in an interview with Time magazine published Thursday that the movement had been “very good for me” as it had made him listen and communicate better.

“My challenge is to listen to people much better than I did at the very beginning,” the president said.