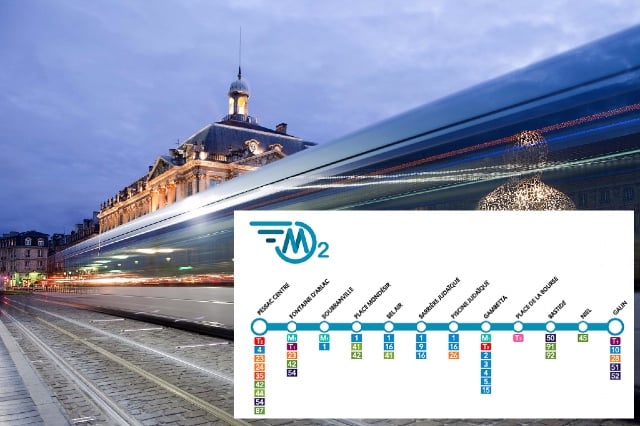 Bordeaux in southwest France is the country’s ninth most populated city with roughly 250,000 residents living in the city but 1.2 million in the whole urban area including the outer suburbs.

It’s an elegant metropolis which is famed for its beautiful streets, great shopping and, of course, its wine. The Bordelais are indeed blessed with a fine city but their transport network is increasingly under scrutiny.

Local sources describe a chronically inefficient and overcrowded tram system that is slowing down movement around the city. Even more cautious critics speak of the ticking time bomb of a acute transport chaos in central Bordeaux by the year 2050.

The city’s TBM bus network is under increasing pressure as well, not aided by the fact that parking in the city centre is more expensive and harder than ever for drivers. As a result, calls for a metro system to be built before the gridlock gets any worse are growing louder, even though it’s a gargantuan project which would subject residents and tourists to potentially serious noise and building disruptions.

“We’ve reached the limit…Bordeaux has to prepare for the future,” Christophe Duprat, city vice-president in charge of Transport and Parking, recently told journalists during a conference on the matter.

“Several sections of the tramline are saturated, between Place de Stalingrad and Pellegrin, or at the Porte de Bourgogne, the station or the university campus.”

Duprat explained how with the planned opening of Line D, Bordeaux’s tram network will be the longest in France, further burdening city coffers with debilitating maintenance costs for a means of transport that’s no longer considered the most efficient or fastest.

“We have to debate whether to go ahead with the metro system plan, the worst thing would be if we didn’t consider it because in 2030 we’ll have our backs against the wall.”

For Duprat, who’s also mayor of Saint-Aubin-de-Médoc, it’s urgent to look into the matter and give Bordeaux metro the green light before the municipal elections of March 2020.

And even the city's mayor is not against the idea.

Nicolas Florian, who replaced former presidential candidate Alain Juppé as the city's mayor earlier this year said: “In Bordeaux we chose a surface transport network back in 1995, but today the tramway is reaching saturation point,” he said.

“We must find a complementary network. Which one? Do we now need a metro system? I am in favor of the debate. But what will the cost be?

“Would a metro system stop us from achieving other things?”

So how feasible is it to build an underground metro system in 2020?

And how about in a city that receives more than 6 million tourists a year and consistently ranks first in France for quality of life, urban design and architecture? Would it disrupt the peace and Bordelais joie de vivre?

At least 25 metro systems have been built around the world in the last five years, almost all in booming cities in China and India. No old, tightly packed European city has chosen to embark on such a quest in recent times.

Worth noting is the fact that there are other French cities among France’s ten most populated with no metro system – Strasbourg, Nantes and Montpellier – all of which have tramways.

Understandably, working on a blank canvas is far easier than having to untangle a densely built city with a major five-year construction plan, a point that could put many residents off.

“The impact of the construction project – at each new metro station -will be huge and very complicated to manage, even if not to the same extent as for the tramway,” Bordeaux metropolis President Patrick Bobet admits.

But the potential short-term noise and building disruptions for residents may be a necessary evil, one that’s better to just get over and done with.

After all, a metro system was already considered for Bordeaux in the 1990s at a time when a population spike had left the city’s transport system “out of breath”.

The idea was abandoned at the time given the complexity of the local terrain. But that was thirty years ago.

“The technology in tunnel construction is very different from what we had back then,” Hervé Lefèvre, head of private operator of public transport Keolis Bordeaux told online newspaper 20minutes.

Lefèvre also believes Bordeaux residents are more likely to be bothered by the above ground noise made by the tram’s under construction line D (set to be operational by December) than by the building of a subway, citing the current construction of Rennes’s metro line B as an example of few complaints. Bordeaux metropolis President Patrick Bobet agrees that the project is viable: “We know how to do it now, including how to go under the Garonne River in complicated terrains,” he is quoted as saying by local daily La Tribune.

“The metro system has the potential to take four to five times as many passengers than the tram network and it will take twice as long to deteriorate and have maintenance problems.”

So it can be done. How about the cost?

According to city officials, if it weren’t for the hefty price tag Bordeaux metro would have been built long ago.

“The metro project’s first negative point is the cost of the infrastructure, which is estimated to be between €1billion and €1.4 billion depending on the options we select,” Bobet said at a press briefing on September 8th.

However the return on investment will be swift given that studies by city officials expect Bordeaux’s metro to increase public transport usage by 214 percent, figures described as “very positive”.

“€1.4 billion is a lot of money, but since the year 2000 we’ve pumped more than €2billion in the tramway,” added Bordeaux transport head Christophe Duprat.

Is there anything else worth considering?

The subway is simply faster than the tram: the former can travel at speeds of up to 38km/h without interruptions whereas the latter only reaches maximum speeds of 18km/h and has to stop at traffic lights and intersections.

The introduction of the subway would reduce the overall time of travel by 22 percent.

Metro trains can also carry more passengers: 12,000 passengers per hour and per direction compared to less than 6,400 for the tramway.

Another point to keep in mind is that trams pose more of a threat to pedestrians as well as for cyclists, therefore hindering the growth of green transport.

On this same note, a Bordeaux metro network could help the metropolis reach the 15 percent share for multimodal public transport, a rate which is in accordance with the city’s current Climate Plan.

Without wanting to badmouth a means of transport that’s been serving les Bordelais since 1880, it seems clear to see that the tram is no longer fit for the purpose.

An ineffective commercial speed, an increasing rate of breakdowns making it unreliable, even its 1980s revamp was geared towards a shifting demographic to the outskirts rather than current trends.

“The metro won’t compete against the tram, it will complete it,” Duprat sums up.

“If we don’t go for it, what else could we choose?”