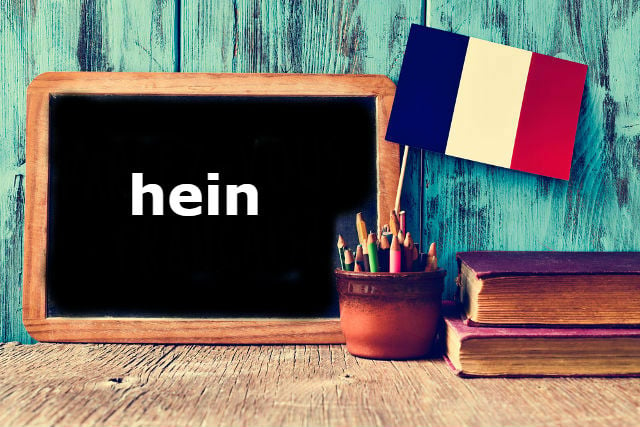 Photo: Depositphotos
Why do I need to know hein?
French speakers pepper informal conversation with hein all the time. It’s one of those words that no one teaches in school, but will make you sound a lot more natural when you talk.
What does it mean?
Hein is an interjection which is used to pose a question or seek confirmation. It is usually found at the end of a phrase, but also sometimes at the beginning or on its own, and serves a number of different purposes.
Hein?, when it’s on its own or at the beginning of a phrase, is very similar to the English ‘huh?’ or ‘what?’, used to indicate that the speaker has not understood something and would like it to be repeated. As in, Hein? Qu’est-ce que tu as dit? – ‘Huh? What did you say?’
And just like ‘what?’, hein? used in this way can also indicate the surprise of the speaker, rather than that they have not heard what the person they are talking with has said: Hein? Tu as déjà fini? – ‘What? You already finished?’
It can also be used to insist on a response, even when the speaker may already suspect that they know the answer: Pourquoi est-ce que vous êtes en retard, hein? Vous êtes réveillé tard ? – ‘Why are you late, huh? Did you wake up late?’
Or to simply solicit the agreement of the listener, like ‘eh?’ or ‘right?’, especially at the end of the phrase. For example, Ce n’est pas si facile que ça, hein? – ‘It’s not so easy, right?’
Finally, hein can be used at the end of a phrase to emphasize what has just been said, as in Laissez-moi tranquille, hein! – Let me be, ok? (In this case, no question is actually being asked).
However hein is used, it's usually in an informal context, and is the kind of filler word you want to avoid in presentations at work or school.
How is it pronounced?
While written as hein, remember that the h is silent and the n is not actually an ‘n’, but signals the presence of a nasal vowel.
For those familiar with the International Phonetic Alphabet, hein is written as ɛ̃. For those who are not, the closest way to write it in English would probably be ‘uh?’, but rather than drawing the ‘u’ out, cut it short and hold your nose while you say it. Or better yet, watch the YouTube video below and hear a French person say it at least 15 times…
How do I use hein?
Still not sure how to use hein ? This video gives plenty of examples, explained by an actual Frenchman.