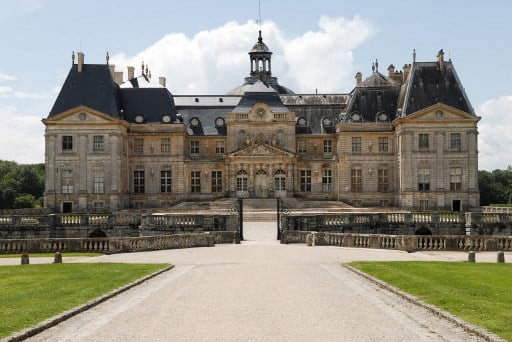 In a scene which appeared to be taken out of a Guy Ritchie gangster film, a group of robbers broke into the baroque castle in Maincy (55 kilometres southeast of Paris) in the very early hours of Thursday morning.

According to reports, the group of six masked intruders then proceeded to tie up the owners of the historic Vaux-le-Vicomte while they plundered the 17th century chateau of as much loot as they could.

Patrice and Cristina de Vogue opened the estate to the public in 1968, and run it with their three sons.

According to police sources, the owners were unharmed during their capture and declined to be examined by a doctor.

A police source said six hooded but unarmed robbers found neckties belonging to Patrice de Vogue, 90, to tie up him and his wife Cristina, 78, in their lodging on the grounds of the palace.

The thieves targeted a safe and stole emeralds and other items, but did not attempt to make off with the chateau's works of art.

The couple was not injured during the robbery, which occurred shortly before dawn, according to prosecutors in the nearby city of Melun.

“The owners are doing fine and the chateau remains open for visits as usual,” the palace's management told AFP.

Vaux-le-Vicomte is the largest privately-owned heritage site in France, sprawled over 500 hectares (1,200 acres), and has some 250,000 visitors each year.

The chateau was built by Louis XIV's finance minister Nicolas Fouquet, who according to legend fell from grace in 1661, shortly after the building work was finished, when he staged an elaborate party there and aroused the Sun King's envy.

Fouquet spent the rest of his life in jail. The monarch then seized the castle and moved its most precious artworks and other objects to Versailles.

It is seen as the beginning of the Louis XIV style combining architecture and landscaping which inspired the building of Versailles Palace.

These days Vaux-le-Vicomte is a popular tourist attraction, with a host of dining options and picnic spots, water shows, exhibitions, and other events (closed during the winter months). The chateau often stands in for Versailles for movie and television productions, from the Roger Moore Bond hit “Moonraker” to Sophie Coppola's “Marie Antoinette”.

It's become a prize spot for celebrity wedding parties, such as the lavish 2007 bash for French basketball star Tony Parker and “Desperate Housewives” star Eva Longoria.

The chateau was due to be open to the public as part of this weekend's annual Heritage Days cultural event.

?? On September 21 and 22, discover the 7 Arts that made Vaux-le-Vicomte the wonderful 17th century palace it is today, during the European Heritage Days! More information onhttps://t.co/tvJB7YdWHE ✨ pic.twitter.com/mX849Tg3Wy