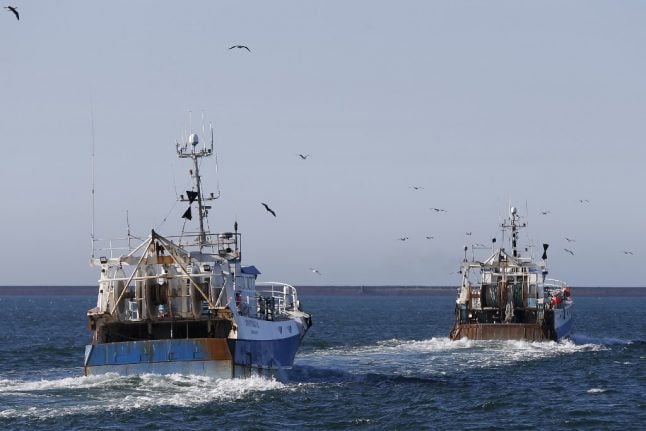 A no-deal Brexit would likely end access for French boats to British waters and, in France, fishing industry players fear this will not just increase tensions with rivals across the Channel but between themselves.

Sophie Leroy, whose Armement Cherbourgeois company operates three fishing vessels off the northwest coast of France, says there have been almost daily checks of their boats by the British authorities.

Earlier this month, her boats were stopped for what she described as an interminable set of checks 21 miles off the English coast.

Her boats were also surrounded by 15 British fishing vessels, she said.

“And they were saying, 'We are going to do the same as what the French did to us last year'.”

The “Scallop Wars” in 2018, when French and British fishing vessels clashed over access to scallops off France's Normandy coastline, was finally settled by the two sides in a deal last September.

While a Brexit deal would help put a framework in place, Britain anticipates the possibility of more clashes between rival fishing vessels if the country pulls out of the EU with no agreement in place.

The government last week released a study of that scenario, codenamed “Operation Yellowhammer”, after a copy of the document was leaked to the press.

One issue it addressed was the possibility that EU vessels could illegally enter British waters, leading to “clashes between vessels”, “violent disputes” or even the “blockading of ports”.

READ ALSO: 'French and British fishermen used to work side by side, Brexit will change all that' So far this time around the two sides have not actually come to blows. But Leroy referred to what she called a “war of nerves” online.

“I've had a photo of one of my boats published on Facebook with a target on it,” she said.

Nor are the British the only problem, she says.

Like other fishing companies, her fear is that if a “no-deal” Brexit closes British waters to the French, then they will be left fighting among themselves over what is left.

The prospect of such infighting — of Breton fishing vessels clashing with their Norman neighbours — hung over this week's Assises de la peche, a fishing industry meeting in the northern French port of Granville.

Food and Agriculture Minister Didier Guillaume made several calls for solidarity during his visit there, both between EU countries affected by Brexit and among French fishermen.

“With a no-deal Brexit, the stakes are high for us,” said Philippe de Lambert des Granges, the fishing ministry official preparing the French industry for the impact of Brexit.

Fish caught in British waters account for 25 percent of the industry's volume and 20 percent of its value, he said — which helps explain the concerns of the fishermen here.

“So, inevitably, there will be conflicts between fishermen, between inshore fishing, between gill-netters, between offshore trawlers who are going to come in closer to the coast.”

The problem will be to quantify the impact of these losses, said Hubert Carre, head of the Maritime Fisheries Committee.

Fishing operators will have to choose how to react, he said, with one option being simply suspending their fleet's activities in return for EU compensation.

“It will be up to the head of each business,” he added.

But many in the industry are reluctant to beach their fleet and take their compensation, for fear of losing their clients.

France is not the only country facing a Brexit blow to their fishing. Eight EU member states will be affected one way or another, said Philippe de Lambert des Granges at the fishing ministry.

For the Belgians, British waters represent 45 percent of their catch volume — and 50 percent of its value, he said.

All eight EU nations that would be hit by a disorderly departure by Britain would have to work together, he said.

France, he said, was determined “in the case of a no-deal Brexit, to maintain or re-establish access to British waters as soon as possible”.