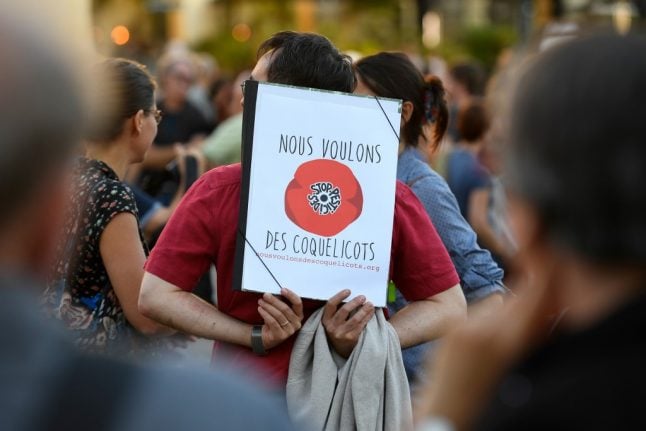 The poppy has become the symbol of environmental protests Photo: AFP

'We want poppies' is a group made up of people from all over France who are concerned about the country's high use of pesticides.

It is lead by Fabrice Nicolino, a freelance journalist who survived the Charlie Hebdo massacre in Paris and began his protest as an online petition a year ago.

Since then the movement has grown to encompass widespread support with rallies held in 800 towns and villages. Nicolino's motto is: “When one pesticide is banned, ten others take its place. We no longer recognise our country. Give us back our poppies”.

The petition has already gathered more than 800,000 signatures and an increasing number of people are backing calls for the government to restrict the use of pesticides.

More than 40 local mayors now support the issue, and Nicolino is calling on all his supporters to gather in front of their local mairie on the first Friday of every month at 6.30pm to demand change.

Beyond the number of signatories, what is interesting is that this movement is not centred around large cities, but instead in small towns and villages directly affected by the use of pesticides.

And public unease has been growing over the use of chemicals on the land.

Last year, the government banned the use of  metam sodium after dozens of farmworkers in the Angers area fell ill. But many other pesticides are still widely used.

Although the official cause is unknown, many people blame pesticides for the spate of babies in France who have been born without arms in recent years, predominantly in rural areas.

In north-west France, a local mayor, Daniel Cueff, was concerned about pesticides banned farmers from spraying near homes or schools in his commune, only to find himself in court for exceeding his authority.

His case became something of a cause celèbre and dozens of people turned up to his court hearing in Rennes to support him.

The environmental protesters took the poppy as their symbol as it grows easily on poor soil, but is also fragile and vulnerable to chemicals.

According to their petition, “Pesticides are poisons that destroy everything that is alive. One-third of birds have disappeared in fifteen years; half of butterflies in twenty years; bees and pollinators are dying in the billions; frogs and grasshoppers seem to have vanished; wild flowers are becoming rare.

“Pesticides are a health tragedy. They cause cancer, Parkinson's disease, psychological disorders in children, infertility, birth defects. Pesticide exposure is underestimated by a system that has gone mad, which has chosen to rush forward. When one pesticide is banned, ten others take its place. There are thousands of them. Give us back our poppies! Give us back the beauty of the world!”

On Monday, the French government launched a three-week consultation on pesticides. One of the proposed flagship measures is the establishment of a distance of 5 to 10 metres between crops treated with plant protection products and homes, a provision recommended by the National Health Security Agency (Anses).

But, according to the vice-president of the poppy collective, Francois de Beaulieu, this is a pointless token gesture.

“Unless the government issues a decree stopping the wind from blowing in France from the date of application of the decree on the five to ten metres… It's ridiculous, we don't care about the world.

“We know that it even affects unfortunate organic farmers, such as a fruit grower who recently lost his crops because traces of pesticides were found from a distant field. It cannot be assumed that residents would be protected by this size of distance.

“The only solution is to help farmers to learn how to do without pesticides for good.”