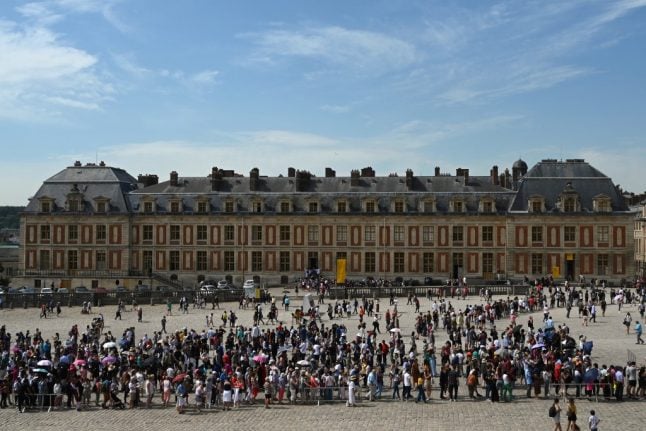 Photo: AFP. Tourists queue to visit the Palace of Versailles.

The survey interviewed 2,350 French people about their experiences with tourists.

One in six of the respondents admitted that they had even felt offended by tourists’ behaviour.

The two key gripes were that visitors to France do not even attempt to speak French and they don't eat enough frogs’ legs.

The French believe – and not entirely unreasonably – that if you come to France then you should at least have the manners to be able to say 'hello', 'where is the Sacre Coeur?'' and 'please don't rob me'.*

They also think every meal in France for tourists should start with an aperitif of snails, followed by some foie gras and then a big plate of coq au vin, with a little crème brûlée for afters.

But these aren’t our only faults – 18 percent find foreign visitors annoying when they speak too loudly in their mother tongue. Apparently, the Americans are the worst offenders. (To be fair, they have something of a point. Nobody enjoys a braying tourist, not even fellow tourists). When in France, go local with the food. Photo: AFP

One predictable complaint that is surely not restricted to tourists is that six percent of French people get annoyed by foreigners becoming a little loud after a few drinks. Who enjoys a loud drunk?

But an unexpected grievance is that we foreigners apparently like to talk with our hands too much. In all, 14 percent said that tourists gesticulate an irritating amount of the time. This coming from a nation who convey paragraphs simply with a dismissive shrug of their shoulders.

Without the faintest blush of hypocrisy, however, almost three-quarters of the people surveyed also admitted to not being able to say more than ‘hello’ in the native language when they go on holiday.

And one in five confessed to not trying local dishes when they go abroad.  When asked to explain why they did not want to taste local cuisine, a quarter of respondents admitted that they thought the food would not be as good as in France.

However, the real surprise of the survey is perhaps that these figures are so low.

Tourists in large groups are by their very nature annoying. In any country.

And France has become a victim of its own success, with too many tourists. The country broke records with almost 90 million tourists last year, making it the most visited place in the world.

It’s aiming for 100 million by 2020 – so brace yourself for even more annoyed looking French people.