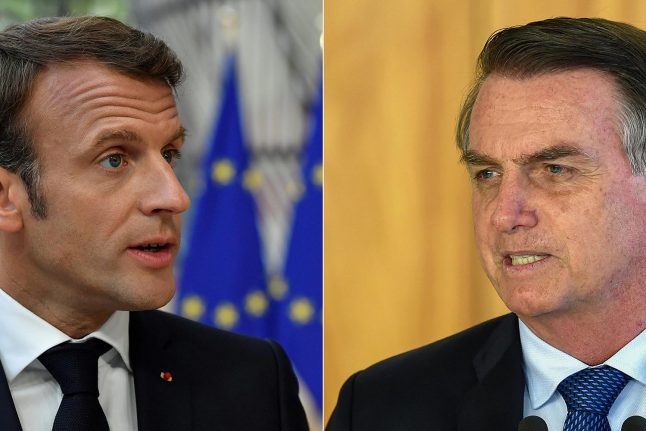 Amid global concern about fires in the Amazon, some activists as well as French President Emmanuel Macron have backed the idea of the international community taking action.

“Charities and NGOs have raised the question for many years about giving the Amazon an international status,” Macron said at the end of the summit meeting of G7 rich countries in late August.

“It's a way forward that is possible and will continue to gain momentum in the next few months and years ahead because the stakes for the climate are so high. You can't say 'it's my problem',” he added.

The idea is that international action could be triggered “if a sovereign state took obvious and concrete measures which were clearly against the interest of the planet,” Macron said.

The world's biggest rainforest, which has been hit by nearly 90,000 fires this year, plays a vital role in the regulation of the world's climate and water resources, scientists say.

Brazil's far-right President Jair Bolsonaro, whose policies are blamed for a spike in fires, furiously accused the 41-year-old French leader of having a “colonialist mentality” by questioning his country's sovereignty in the Amazon.

He has also encouraged Brazilians to wear the country's colours — green and yellow — during its Independence Day celebrations on Saturday to reaffirm Brazil's national rights over the area. Macron conceded that there was major “political and legal work to be done”.

The idea of Brazil or any of the other Amazon countries agreeing to sacrifice their sovereignty in the Amazon remains the realm of science fiction for the moment, experts say. But in a recent article in Foreign Policy magazine, an American professor imagined a scenario in 2025 in which a fictional American president gives Brazil an ultimatum: either stop deforestation or face a naval blockade and airstrikes.

The author, Stephen Walt from the Harvard Kennedy School, admitted that the scenario was “obviously far-fetched” but designed to highlight the dilemma of “how far would you go to prevent irreversible environmental damage?”

He points to work by legal scholars who have argued that the UN Security Council could authorise military action using Article 42 of its charter, if the activities of a state were found to be a threat to international peace and security.

The idea of UN “green helmets” to prevent or manage environmental disasters — as opposed to “blue helmet” peacekeepers in warzones — has also been mooted for decades, including by former Soviet leader Mikhail Gorbachev.

But Walt told AFP that “the threat or use of force would probably be counterproductive. I believe major powers will be forced to do more to stop climate change, beginning by reducing their own reliance on fossil fuels.”

Some climate change activists have also pointed to the hypocrisy of Western hand-wringing over the Amazon: the biggest cause of man-made global warming is the historic greenhouse gas emissions of developed countries.

And if Brazil's failure to protect the Amazon is an environmental danger to the world, then what about the United States, the world's second-biggest emitter of greenhouse gases, which has pulled out of the 2015 Paris climate accord? Leaders from Amazonian South American countries — Colombia, Peru, Bolivia, Surinam, Ecuador and Brazil — are set to meet in the Colombian city of Leticia on Friday to discuss the fire crisis. Bolsonaro will not attend because doctors have told him to get ready for surgery scheduled for next week, his spokesman said this week.

Lucien Chabason, an advisor at the Institute of Sustainable Development and International Relations (IDDRI), said he believed that “pressure from Western countries might be counterproductive.”

The Paris-based think-tank argues in favour of regional protection agreements, which make countries answerable to each other for environmental violations. One example was the 1999 pact for the protection of the once-heavily polluted Rhine river, which begins in Switzerland and flows north through France, Germany and the Netherlands.

The pact involving all of the countries has helped clean it up, with swimmers now returning to its waters. Others stress that a regional agreement already exists to protect the Amazon environment: eight South American countries signed a widely ignored one in 1978.

“This agreement might be enough, but it needs to be followed,” said Michel Prieur from the International Centre for Comparative Environmental Law. “There's not going to be an international agreement any time soon. We should use the existing one.”

Walt, from the Harvard Kennedy School, suggests another idea: “States that happen to govern environmentally sensitive territory could be paid to preserve it, in the interest of all mankind.”

But the leftist former leader of Ecuador, Rafael Correa, tried this in 2007 when he asked for compensation for not developing oil projects in the Yasuni National Park. After this effort failed, oil companies were given the greenlight in 2013.