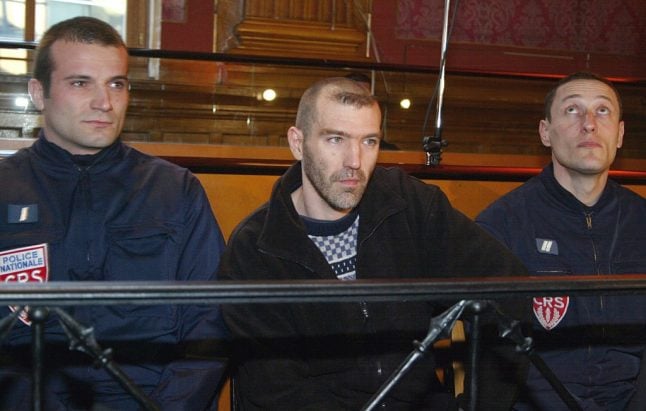 Patrice Alègre, centre, at his court case in 2002. Photo: AFP

Convicted of five murders, one attempted murder and six rapes, Patrice Alègre is considered one of France's worst serial killers. But now his lawyer says he is applying for release as his jail term is coming to an end. The families of some of Patrice Alègre's victims. Photo: AFP

At the time of his arrest in 1997, Alègre was a 29-year-old resident of the southern French city of Toulouse, where he had worked as a handyman and waiter and barman at the train station, where he first met several of his victims.

He later told police that he had a difficult childhood as the son of a teenage mother and a member of the CRS riot police squad, who he says was often violent towards his wife and child.

What did he do?

He was arrested in 1997 after the rape and murder of a 35-year-old woman who he had worked for as a handyman. Despite being identified as a suspect, he was able to flee the police and spent several months on the run in Spain, Germany and Belgium. He eventually returned to Paris where he stayed with a woman he had met in Spain. After staying with her for some days he raped and killed her before setting her body alight.

Police finally caught up with him on September 5th 1997.

Despite the horrific nature of his crimes, the case received relatively little international attention as the world's media was preoccupied with Princess Diana, who had died six days earlier in Paris. Once in custody he confessed to two other murders. Police reported that when being questioned he was co-operative and was described as a 'friendly' man who could talk about rugby for hours.

A 21-year-old woman then came forward to report being raped by Alègre. Although he attempted to strangle her, she managed to get free. The only known survivor of the brutal killer, she later committed suicide.

Realising the horrific nature of his crimes, Toulouse police then opened a cold case investigation which included exhuming the bodies of several woman. Alègre was eventually linked to the deaths of three other women.

He was convicted of all charges following a court case in 2002, and sentenced to 22 years in prison.

While is prison he began writing to a Canadian woman who is now his partner.

What is happening now?

Alègre, now 51, is reaching the end of his sentence is and has asked his lawyer to petition for his release.

Lawyer Pierre Alford, who represented Alègre at his trial back in 2002, said he was recently contacted by the prisoner's partner and asked to prepare a request for release. He told French newspaper 20 Minutes: “After 24 hours of reflection, I accepted and visited him at the prison last Wednesday.

“We are coming to the end of his security sentence, he is entitled to file this request, it is not open to discussion.

“The question is whether it is well founded, whether he has evolved, and it is not up to me to give the answer, it will be assessed by psychiatrists and the court for the enforcement of sentences will decide.”