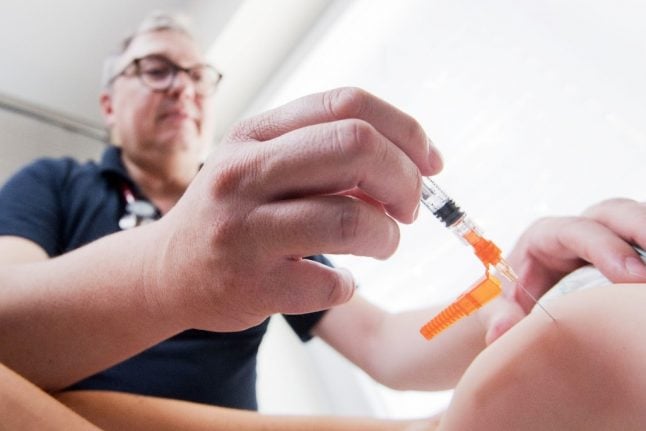 There are now 11 compulsory vaccinations in France. Photo: AFP

When children register for school in France, parents will be asked to provide, among other health records, proof that they have been vaccinated.

And since a new law was introduced, a total of 11 vaccinations are now compulsory in France. Measles has killed 23 people in France since 2008. Photo: AFP

Diptheria, tetanus and polio vaccinations have been compulsory for some time, but in 2018 another eight were added to the list – whooping cough, measles, mumps, rubella, hepatitis B, influenza, pneumonia and meningitis C.

The extra vaccinations were already recommended to parents, but last year's law made them compulsory, although there are some exemptions on medical grounds if a child has a condition which can make vaccinations harmful.

The vaccinations are compulsory for any child born on or after January 1st 2018.

Health Minister Agnes Buzyn was concerned that the low take-up rates of the vaccinations were creating a “public health crisis” particularly with the reemergence of measles, which has killed 23 people in France since 2008.

“We have the same problem with meningitis. It's not acceptable that a 15-year-old teenager could die just because they have not been vaccinated,” the minister said.

Lower vaccination rates are not just a problem for people who have not had the jab, they also lower the 'herd immunity' which protects people who cannot be vaccinated such as very young babies and people with a compromised immune system such as those undergoing cancer treatment. What is the problem with vaccination levels?

France has the lowest rate of trust in vaccines in the world, with a recent survey showing that 33 percent of people polled saying they do not agree that immunisation is safe.

France is not alone in having falling rates of trusts in vaccinations, both the UK and the US have seen lower rates of children getting the measles, mumps and rubella vaccine, with the result that the UK recently lost its 'measles free' status and there have been several large outbreaks in the USA.

France is the only country in the world that makes vaccination compulsory, something which may have been counter-productive in building trust says Francoise Salvadori, a biologist and co-author of Antivax, a history of the anti-vaccination movement in France.

“We have never abandoned 'paternalistic medicine' despite the fact that every time more vaccines are pushed upon us, there is a greater resistance to them,” Salvadori told The Local, pointing out that Britain scrapped obligatory vaccinations in the 19th century.

“But it is difficult for the government to know how to take action when not enough people are being vaccinated – and yet obliging them to do so does not seem to work either.”
Like many countries, the 'Big Pharma' conspiracy theory – the idea that the medical establishment and pharmaceutical companies operate for sinister purposes and against the public good –  is prevalent in France.
On top of that in France health ministers are often doctors, and therefore seen as complicit in any dealings with the pharma industry, “stuffing their pockets and working against the public”, said Salvadori.
The results of the recent survey could also represent a more general loss of confidence in the French state of which the anti-government 'yellow vest' protests were a sign, said Salvadori, adding that France has also seen a few incidences involving vaccinations that may have made people more skeptical over whether they, or their children, need to be vaccinated.
What if my child is not vaccinated?
Any child who has not had the full 11 vaccinations by the time they start in full time education (which is now compulsory from the age of three) will not be fully enrolled in school. Instead they will be provisionally enrolled and the parents will be given three months to have the vaccinations carried out.