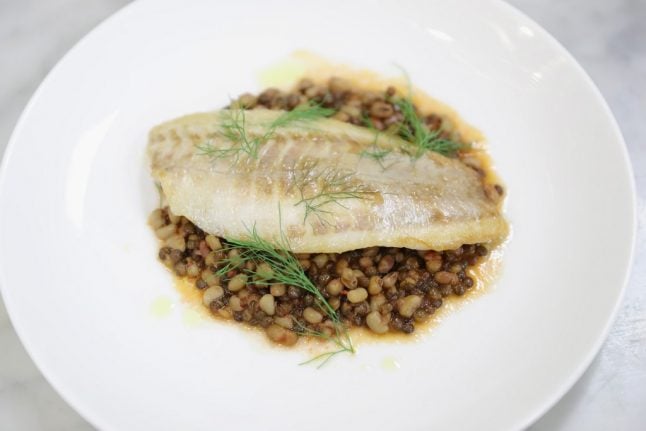 Is this fish sitting on a bed of lentils or contact lenses? Photo: AFP
When in France – the land of haute cuisine – you want to be sure you're making the right choice about what to eat, especially if you're the kind of person who would rather avoid calf brains (tête de veau) or cow stomach in jelly (tripes).
But while English menus can certainly be helpful, some of them – which appear to have relied on online translation engines – can just cause even more confusion.
In this list we’ve collected together some of the funniest – and downright strangest – translations from French to English seen on French menus, with the help of some contributions from our readers.
1. Salad of lawyer
This one is quite common and comes from the fact that the French word avocat can translate as either lawyer or avocado. If it's served in a salad it's more likely to be the green fruit, at least we hope so.

Another word with two possible translations is plat – which can mean either a dish or a main course or flat, as in plat comme une crêpe (flat as a pancake).

In this case, choice of main course might have made a little more sense. Delicious as a saddle of lamb can be, the “scum of garlic” on this menu might not be so tempting.

L'écume can translate as either a scum or a foam, the letter of which might be slightly more appetising.

“Top tip, when you translate a French restaurant menu, ask an English speaker to check it,” said Kevin Gunning on Twitter. 4. Sea bass on a bed of contact lenses
The French word for contact lenses – lentilles de contact or simply lentilles – is the same as for lentils, leading to some slightly surprising translations of accompaniments.
5. Always check your translations before you go ahead and print it on your window
Little known fact: goats made entirely of cheese and “campinge deer” are said to roam countryside in some parts of France.
The word chèvre means both a goat and goat's cheese, but on a menu chèvre chaud mean you will get delicious warm, slightly melted goat's cheese. 6. Back of wolf wipes virgin

Un loup in French is a wolf, but wolf meat doesn't tend to appear on menus much. However a sea bass is un loup de mer (sea wolf) often shortened simply to loup to the great confusion of anyone who has looked up terrine de loup and wondered if that can possibly mean wolf paté.

This menu below seems to have really gone to town on the bizarre translations – see also the 'opposite of apples' or the 'feet packages' – but for those wondering sauce vierge (virgin sauce) is made with lemon, shallots, tomatoes, capers and extra virgin olive oil (hence the name). Bacon rashers are not very common in France, to the endless despair of Brits who miss a bacon sandwich, so bacon tends to come in the form of lardons – small pieces of fat bacon.

However lardon often seems to be translated into English as lard – the white rendered animal fat popular with grannies for cooking but not exactly what you want to see plonked on top of your salad.

You're hungry and in the mood for beef… it's time to try a 'hunger steak' as this menu would have it (or 'skirt steak'/'hanger steak' as you're more likely to call it). Onglet is also quite similar to ongles (finger or toe nails) which we've also seen as an extremely off-putting translation. 8. Piece of the butcher

Pièce du boucher is a common sight on French menus, it refers to cuts of beef from the animal's rump area believed by many to be the best cuts (hence the belief that butchers themselves saved these bits for themselves, the 'butcher's piece').

It does not mean you are about to be served a piece of the butcher. Let's hope it comes with a hammer and chisel. Although pavé does mean a paving stone, in this context it does not.

Sticking with the DIY theme, une tuile in French does indeed mean a roof tile. But it also refers to the delicious little curved biscuits of the same name. They get their name due to their distinctive shape – made by draping the oven-warm biscuits over a curved surface.