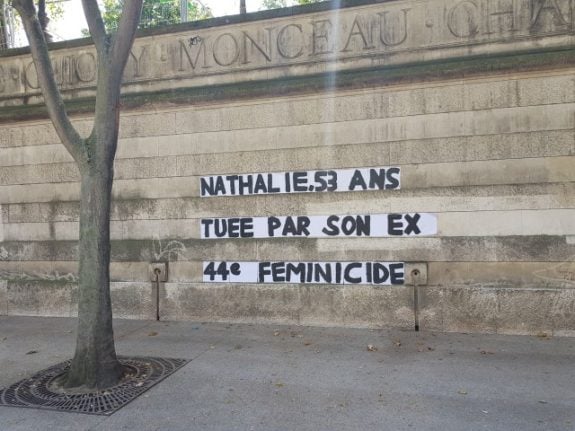 One of the many ad hoc memorials in Paris to victims of domestic violence. Photo: The Local

The horrifying statistics lead to a widespread grassroots campaign urging the government to look again at a system that does not currently protect women from violence at the hands of their partners or ex partners.

France is one of the European countries with the highest number of such murders, according to EU figures from 2017 which put it second only to Germany. Last year, 121 women were killed in France in these circumstances, equating to one death every three days. So far this year, at least 101 women have been killed by a current or former partner.

“For centuries, women have been buried under our indifference, denial, carelessness, age-old machismo and incapacity to look this horror in the face,” Prime Minister Edouard Philippe said on Tuesday, launching a major consultation on domestic violence grouping dozens of ministers, judges, police officers, victims' relatives and representatives of feminist groups.

Here are the measures outlined by the government;

1. The creation of 1,000 new places in shelters for women fleeing from violent partners.

2. Women who are victims of domestic violence will benefit from a Visale guarantee, or free rental deposit, making the search for new housing in the private sector easier.

3. A new geolocation platform will be launched on November 25th which will enable professionals like social workers and housing officers quickly identify the nearest accommodation for women who are fleeing violent partners. 5. Auditing of 400 French police stations throughout September to ensure that the all have the correct level of training and are offering an effective and consistent service to victims of domestic violence.

6. Police will be issued with a risk assessment grid that will help them determine the level of risk that the women is facing.

7. Women will also be able to file a complaint from a hospital, rather than having to go to a police station.

8. A new feedback method will be introduced into the offices of public prosecutors to asses how perpetrators of domestic violence are being dealt with by the judicial system.

9. Judges in criminal cases involving domestic violence will also be able to withdraw custody rights from abusive fathers, rather than having to wait for the case to be dealt with by the family court.

10. In cases involving femicide, parental rights will be automatically suspended if the father is a suspect or under investigation, rather than having to wait for a charge.

To mark the government's heightened action on the issue, President Emmanuel Macron on Tuesday visited the office of a domestic violence hotline in Paris and listened in to calls as they came in.

He heard the call of a woman who had decided to leave her abusive husband tell one of the hotline operators that the police were refusing to assist her.

“You're in the police station? You're in danger. your husband is at home. The police can accompany you,” the operator, Elena, assured the caller.

However, an officer of the military police came on the line and said that he needed a judicial order to intervene.

The unheard President Macron shook his head and wrote notes to help the operator.

“It's the gendarme's job to protect her when the risk if evident,” with or without any extra judicial permission, the note said.

However, the gendarme on the other end of the phone insisted it wasn't his place to intervene.

Feminist groups welcomed the focus on the issue, but said that the government's failure to commit a budget to the measures was disappointing.

“No resources have been announced so frankly the announcements are disappointing,” Caroline De Haas, founder of the group Osez Le Feminisme (Dare To Be Feminist), said.