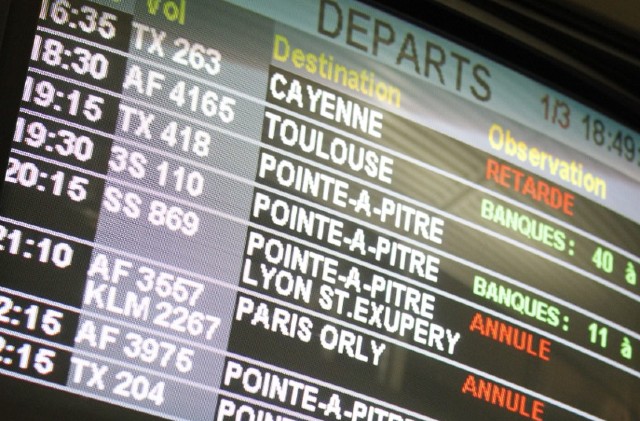 New figures released by Air Indemnité, a specialist body that manages compensation claims for disrupted or delayed flights, show that 545,225 passengers were affected by either the cancellation of their flight or a delay or three hours of more – meaning they are eligible for compensation.

No fewer than 1,423 flights departing from or arriving in France were cancelled this summer and 3,402 were delayed for more than two hours. The worst international route was Los Angeles to Paris Charles de Gaulle airport, where nearly one in 10 flights were disrupted, followed by Paris CDG to London Gatwick and Nice to London Gatwick.

The worst domestic flights in terms of delay or cancellation were Paris Orly to La Réunion, Bastia to Nice and Toulon to Paris Orly which had disruption rates of 5 percent, 3.92 percent and 3.89 percent respectively.

The biggest single problems over the summer were the safety fears over the Beoing 737 which saw many planes grounded and several days of strikes by staff at Spanish airline Veuling.

But the figures paled in comparison compared to 2018, which saw repeated strikes in France that lead to thousands of flights being delayed or cancelled as the industrial dispute dragged on for most of the summer.

“The number of flight cancellations on departure or arrival in France has decreased by 48 percent compared to last year, and the number of delays of more than two hours by 24 percent,” Anne-Laure Héry, Air Indemnité spokesperson told Le Parisien.

However, the figures only run until the end of August, so do not include Sunday's IT failure at French Air Traffic control, which saw thousands of flights grounded until the problem was fixed.

EasyJet said it has been forced to cancel 180 flights out of almost 2,000 scheduled to take off on Sunday.

And there are potentially problems ahead as Ryanair staff in Spain will be on strike until September 4th, while staff at the Dutch airline Transavia have also lodged notice of potential strikes lasting until October 15th.