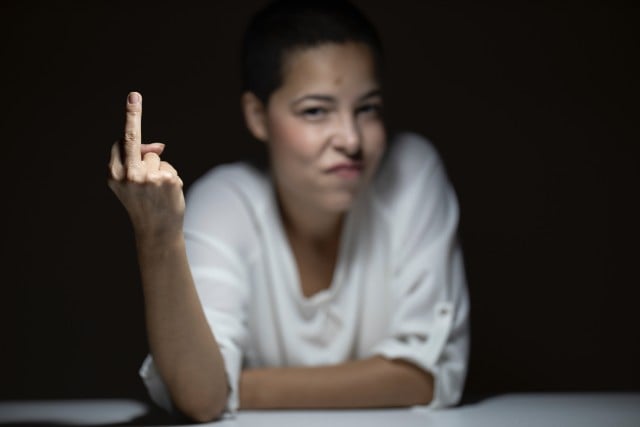 Photo by engin akyurt on Unsplash

While the word's primary meaning would be 'hooker', putain is, to some French people, more of a punctuation sign than a swear word. This is basically the counterpart of the English 'fuck'.

Putain was made to express joy, anger, surprise, indignation and so much more you may as well adopt it immediately.

On a day-to- day basis, no one will be especially outraged to hear you swear by using putain but try not to overdo it: French people do love it, but even love has its limits. We love it too, so much so that we've written an entire article on it here.

READ ALSO The nine very best French insults (for use when you're very, very cross) Got road rage? Let it all out in fluent French. Photo: AFP

Merde is probably the second most used swear word in France, just behind putain. This is both an insult and a swear word, or as the French people call it, un gros mot.

So many expressions have derived from merde – such as verbs like merder or emmerder – it has become virtually impossible for a French person not to use it.

Je comprends pas pourquoi ça a merdé – I don't understand why it went to shit.

While we concede that using merde wildly is a really tempting prospect, moderation will be key!

Or in its strongest use it can be used to describe someone as a wanker, which is how Le Parisien translated English actor Hugh Grant's sweary rant about the British Prime Minister Boris Johnson and his government.

A casse-couilles is a pain in the ass. In a more literal translation, this is someone so annoying they could crack someone's balls – casse means break, and couilles is a French slang word for testicles.

An alternative to this word is casse-burnes, as burnes is a slang word for balls as well.

You may have already heard this saying in another form, as French people tend to say Tu me casses les couilles! quite often. This literally means 'You are breaking my balls!'

Men and women alike can use it: this a genderless word, despite the expression referring to male privates. To convey the idea of annoyance is more important than the expression being a hundred percent accurate.

Casse-couilles is quite widespread and is considered as a rather acceptable swear word. Though you would want to avoid using this in front of your boss or call someone you barely know as a casse-couilles to their face.

But if you want to be polite, a more courteous way to use this expression would be to substitute couilles by pieds (feet) – resulting in casse-pieds.

Connard is derived from the well-known French word con. While the latter only means dumb, connard is much stronger than this.

French people will use connard – and connasse for women – to insult someone having an awful behaviour, being entitled, obviously rude or lacking manners. France's drivers are particularly fond of this word: connard and connasse appear as go-to swear words when on the road.

Quelle connasse, elle est passée devant tout le monde – What a stupid bitch, she jumped in front of everyone in the queue.

Many French people tend to use the word to describe Parisians as well.

The cliché is so persistent a French comic candid camera series entitled Connasse – about a spectacularly rude and entitled Parisienne – became a huge hit and was turned into a film.

This one is quite tricky depending on whether you are using it to for a man or a woman. Salope to describe women and salaud to describe men have the same origin, but not the same meaning.

The word comes from a small bird called an hoppe, hoopoe. Having a reputation of being a dirty bird, French people coined up a saying by adding the adjective sale -dirty – to huppe, resulting in sale hoppe.

Soon enough, the deriving word salop was born, for French people to describe shabby persons (salop was the former spelling of the now salaud).

From the 1700s, the feminine version salope began being used to talk about prostitutes. Come to our days, where salope is still used to describe women considered to be of easy virtue.

While there is a strong sexual connotation in using salope, the masculine version of salaud  is not as insulting.

Quel salaud, il a trompé sa femme pendant deux ans – What a bastard, he cheated on his wife for two years.

Quelle salope, elle a trompé son mari pendant deux ans – What a slut, she cheated on her husband for two years.

The word carries more meaning when aimed towards women, so be careful what you mean if you decide to use it anyway.

Here is the French version of son of a bitch. There is no need for further explanation here, just a fair warning that if you are looking for trouble, you will probably find it by calling a man fils de pute.

Vous êtes une belle bande de fils de putes! – You all are a bunch of sons of bitches!

On the other hand, even if calling a woman a fille de pute would not be technically wrong, French people make no use of the expression's feminine version. How about a few more polite alternatives?

Une peau de vache is someone mean and hostile. Bizarrely translating to 'cow skin', the expression has been around since the 1880s.

C'est une peau de vache, elle ne me dit jamais bonjour! – She is a cow, she never says hello to me!

The expression is mainly used to talk about women, though you can still call a man une peau de vache.

The secret to abruti being an effective swear word while being relatively polite is the tone of your voice when pronouncing it. You have to really mean it,as it came from the bottom of your heart.

Il faut vraiment être abruti pour se tatouer un truc pareil! – You must be a real half-wit to get yourself a tattoo like this one!