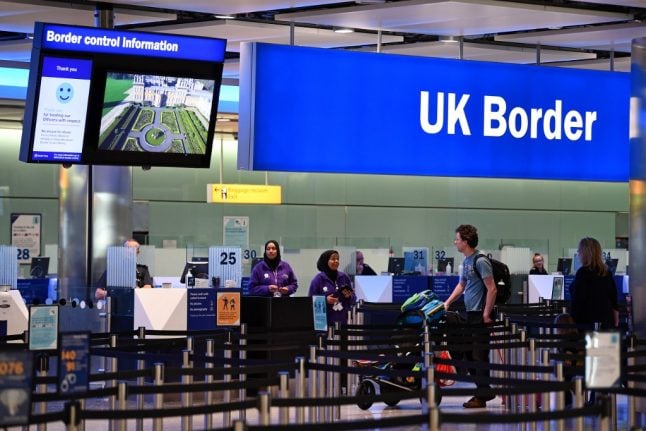 Travel in and out of the EU after Brexit will become more complicated. Photo: AFP

One issue that we have been asked repeatedly is whether people who do not already have the carte de séjour residency permit will be able to travel in and out of France in the case of a no-deal Brexit.

TELL US: What questions do you have about a no-deal Brexit?

And the short answer to that is that at present the rules are not certain. What exactly is the problem?

France is one of the few countries in the EU (along with Spain and the UK) that has never required EU citizens to register for residency if they are living in the country long term. So while British people living in countries such as Sweden will already have identity cards confirming that they are residents, many thousands of Brits in France have nothing official to say that they live here.

Since the Brexit referendum in 2016 a significant proportion of the British population here have obtained the carte de séjour residency permit, but many others have not as it is currently not a legal requirement and in recent months many préfectures have stopped processing applications from UK citizens, as the application will have to be processed again after Britain leaves the UK.

If Britain leaves the EU without a deal, the French government has said it will give a one-year grace period for Brits to obtain their cards (although applications will have to be made within six months of the Brexit date).

But that will still leave many residents without any official proof of their status for many months while the thousands of applications are processed.

So what about travel?

While a lack of carte de séjour is initially unlikely to cause problems while you are in France – what about at the border?

The EU announced in 2018 that it would allow visa-free travel for Britons entering the Schengen area for 90 days or less – the current limit for how long non EU residents are allowed to stay in Europe as a tourist.

However this is based on the UK offering a reciprocal deal for EU citizens in Britain, and British Home Secretary Priti Patel's recent announcement that “all freedom of movement will end on October 31st” seems to have cast some doubt on this.

Her announcement had no concrete detail in it, that is apparently following shortly, but it was enough to cause concern.

There is also the issue that non EU citizens entering the EU without a visa could have their passport stamped as a tourist, which if you don't leave France after 90 days could lead to you being branded an 'overstayer' which would make it hard to travel and could even see you being deported.

So does that mean Brits without cartes de séjour cannot travel?

There's been a distinct lack of official advice on this, meaning that the issue isn't clear.

It's something that citizen's rights group Remain in France Together (RIFT) is urgently seeking clarification on.

A spokesman for the group posted on Facebook: “The issue of re-entry to France for those without a current carte de séjour is one that we've taken up with the European Commission, the Ministry of the Interior and the British Embassy but we've not yet had a satisfactory response.”

Further meetings are planned in attempt to get clearer answers.

In the meantime British people planning to travel after Brexit are advised to take with them any proof they have that they are resident in France – for example carte vitale, proof of address such as utility bills or rental contract, employment contract or tax returns if you have been here long enough to complete one.

Some mairies will also provide on request an attestation stating that you are a permanent resident in the area.

While the French government is yet to issue official advice, some other EU countries, for example Germany, have advised Brits without a residence permit to carry documentation proving that they are a long term resident when travelling in and out of the country.

While lugging around a big file of papers every time you travel might seem a little over the top, it's probably better to be safe than sorry, a least until any official clarification can be obtained.