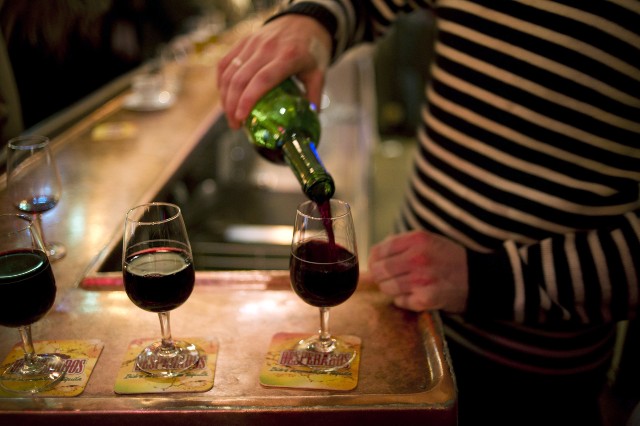 Don't believe that a Frenchman will sip these in a sophisticated fashion. Photo: AFP

The English may claim to have invented binge drinking (or beuverie express as the Academie français insists it is called in France) but the adventures of French drunks are many and varied, and have even inspired a Facebook group dedicated to their antics entitled Ivre il, inspired by French newspaper reports on the subject which generally begin Ivre, il . . . (drunk, he . . .)

You probably remember this 2013 drunken odyssey of a young Brit who started his evening in Manchester and finally woke up in a Parisian toilet.

But many French people have also overdone it on the apéro.

Back in 2013, Bordeaux inhabitants woke up to this unusual and surprising headline from the local newspaper Sud Ouest: Ivres, ils volent un lama et lui font prendre le tram – Drunk, they steal a lama and take him on the tram.

The five drunken students had been walking by a touring circus on their way back home from the club in the early hours. They spotted caged animals and decided to take a lama called Serge for a walk. They wandered in the streets for a while and ended up hopping on the tram, accompanied by their new friend.

The five young men finally tied the lama, unharmed, to a street lamp before running away. They were arrested a few minutes later and put in custody. The circus owner initially filed a complaint, but soon withdrew it considering the unexpected regional enthusiasm for the animal.

Serge gained an international media career from the adventure, he was invited to a football game between Bordeaux and Nantes and made many TV appearances.

This epic adventure was followed by many other French drunk champions making local headlines for their madcap drunken deeds.

The drunk teenager drew the policemen's attention on purpose, before cackling and imitating chicken gestures:  a daredevil impersonation considering French policemen are nicknamed les poulets – chickens – and are usually not very fond of it.

The newspaper Ouest-France also offers quite a collection of such headlines.

Around 1am, policemen were patrolling the streets of Rennes on foot. When they came back to their car, a 74-year-old drunk woman had taken a place in the backseat, mistaking the vehicle for a taxi. The policemen were willing to take her home before she refused to give her address and insulted them. She was driven to the nearest hospital. The 30-year-old man was sitting on the couch in his underwear, a beer in his hand, when the woman who occupied the house found him on a Sunday morning. When the police arrived, the man claimed he lived there.

As reported by La Montagne, the man was so drunk he did not realise he mistook his neighbour's house for his, three doors down. He humbly apologised as soon as he came round.

If you have a phone registered in an EU country you don’t need to worry, thanks to the EU’s cap on charges for people travelling, but everyone else needs to be careful with their phone use abroad. Here’s what you need to know.

How to avoid huge ‘roaming’ phone bills while visiting France

Speaking of travel … the virus that should not be named hasn’t gone away. Here are your questions answered on testing, isolation and medical treatment if you fall sick while on holiday.

Paxlovid, tests and isolation: Covid care for tourists in France

Going to the cinema is one of life’s joys for many people – and France, the home of Cannes, is well known as a nation of cinephiles.

But what if you want to enjoy an overseas film with its original language soundtrack rather than one that has been dubbed into French? You can do that…

Reader question: Can you avoid seeing a dubbed movie in French cinemas?

But the climate crisis and rising sea levels mean that experts fear they will no longer be rare events along the Mediterranean coast in the next 30 years.

In very much related environmental news, France has endured at least 43 heat waves have been detected since 1947, but they are becoming more alarming – with the latest one, before all the storms, breaking temperature records all over the place.

So, here is how the country plans to change the landscape of its cities in order to cope with ever-increasing canicules.

Trees to trams: How French cities are adapting to summer heatwaves

And finally … From football to breakfast pastries, France contains some fierce local rivalries which are mostly fought through words and gastronomy, but occasionally spill over into physical battles. Here’s a look at what near neighbours in France love to hate about each other.

Cassoulet to cider: Where are France’s fiercest local rivalries?