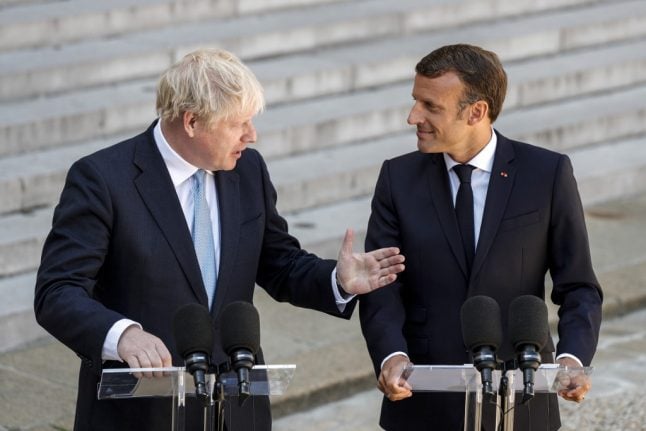 Boris Johnson and Emmanuel Macron at the Elysées Palace in Paris. Photo: AFP

Speaking at a joint press conference with French president Emmanuel Macron in Paris, the British Prime Minister said: “London remains one of the biggest concentrations of French citizens on earth and long may it so remain.

“And I know of course, Monsieur le President, you will want to treasure and support the hundreds of thousands of British citizens here in France.”

Macron responded to his comment with a smile and a nod.

There were no further details forthcoming on the status of UK citizens in the EU, or EU citizens living in the UK.

An upbeat Johnson said that he still wanted Britain to leave the EU with a deal, but reiterated that Brexit would be happening on October 31st, “deal or no deal”.

He added that he sees “readily available solutions” for the Irish border, but a stern-faced Macron reiterated that the backstop was in place to balance the deamnds of peace and stability in Ireland and the integrity of the European market.

“We need to try to have a useful month,” Macron said alongside British Prime Minister Boris Johnson, adding it was possible to “find something intelligent” in the next 30 days.

But Macron, who admitted he had a reputation as the “hardest in the gang” on Brexit, has rejected Johnson's calls to scrap a key arrangement for Ireland negotiated between the EU and former British premier Theresa May.

At stake is the so-called “backstop”, which is a provision guaranteeing that border checks will not return between EU member Ireland and Northern Ireland which is part of Britain.

Johnson considers the backstop to be “anti-democratic” and an affront to British sovereignty because it will require London to keep its regulations aligned with the EU during a transition exit period.

“The technical solutions are readily available (to avoid checkpoints) and they have been discussed at great length,” Johnson said. “You can have trusted trader schemes, you can have electronic pre-clearing.” The EU argues the backstop is necessary to avoid the re-emergence of checkpoints which could lead to a return of fighting on the divided island where anti-British violence has claimed thousands of lives.

“I want to be very clear. In the coming month, we will not find a new withdrawal agreement that is far from the fundamentals,” Macron said at the  Elysee palace in central Paris.

Since Johnson's ascent to power last month, the chances of a “no deal” Brexit on October 31 have risen, which economists see as likely to wreak economic damage on Britain and the EU.

“The EU and member states need to take the possibility of a 'no deal' outcome much more seriously than before,” a senior EU official told reporters in Brussels on Thursday on condition of anonymity.

A French official said on Wednesday that this was becoming the “most likely” scenario.

The Paris visit was the second leg of Johnson's first foreign trip as prime minister.

On Wednesday, he was in Berlin for talks with Merkel who appeared to offer a glimmer of hope by saying Britain should try to find a breakthrough to the issue over the next month. “I want a deal,” Johnson told Macron. “I think we can get a deal and a good deal.”

He added that he had been “powerfully encouraged” by his talks with Merkel.

“I admire that 'can do' spirit that she seemed to have.”

But many Brexit watchers see Merkel's remarks as fitting a pattern in which she has often been more conciliatory in public about Brexit than Macron, whose abrasive remarks have caused anger in London in the past.

“There is not the width of cigarette paper between Paris and Berlin on these issues,” a senior aide to Macron said on Wednesday on condition of anonymity.

The EU official in Brussels added that the EU was “a little concerned based on what we heard yesterday (in Berlin).”

“We are waiting for new facts, workable ideas,” the official added.

The two gave a brief joint press conference before a working lunch at the Elysées Palace.

They will be among the world leaders gathering in Biarritz on Saturday for the G7 conference.